The first time I saw a man in drag in Quito…

With all the wonderfully varied traditions and holiday activities all over the world, I would say that it’s hard to come across one that truly surprises you anymore. With the rise of online media and digital storytelling from all the corners of this great Planet, we have the ability to see intimate moments and celebrations anywhere, no matter where we’re from.

Ecuador is no exception to this rich variety of holiday traditions. As mentioned in a previous blog piece (found here), the baking and celebrating of the Day of the Dead is lovely and something I look forward to each year.

But the man in drag… It was my first time in Ecuador and having never travelled by myself before, I was a bit anxious and I would certainly define it as “on edge” as well. I had a long day of travel and arrived into Quito at about midnight. At the time I also didn’t speak Spanish, but instead thought to myself (as most Canadians do, I am sure), “I speak French, how hard could it be to understand Spanish?” Well, when approached by a man dressed in drag at the airport in Quito with a container of coins, there was no French to Spanish translation that was going to help me in that moment.

It turns out that it was New Year’s eve and traditionally in Ecuador men dress up as women – pretending to be widows – they go around asking for spare change. 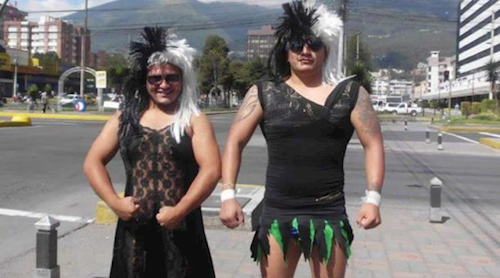 While I am not clear on the administrative backing of this, it is said that the money is for charity in the end. There are usually local competitions and in 2017-18 in Puerto Ayora, a pageant of sorts happened during the New Year’s Eve celebrations where several men competed for the prize of “Best Widow”. (The one that brought the doll and cried very convincingly, but also danced well, won.)

So, if travelling in Ecuador around New Year’s there’s no need to feel flabbergasted to have men dressed as woman approach you asking for change. If you’re feeling adventurous, ask them for their story before dropping a coin or two into their container!