Fuggedaboudit - leave your yogurt behind

The Galapagos regional government (a.k.a. the governing council) approved a motion to ban the importation of yogurt from the continent last week.   Most such bans on the importation of foodstuffs to the islands are designed to reduce the risk of introducing alien species, which can upset native communities there.

But in this case, the local dairy producers that are the target of concern.    By banning the importation of continental yogurt, the council hopes to give the local producers some breathing room to produce their own native yogurt for island consumption.

Notwithstanding the bottom-line benefits to local dairy farmers, there are some environmental benefits to such a policy.   A significant portion of inhabited islands in Galapagos (mainly Santa Cruz, Española and to a much lesser extent Isabela and Floreana) are privately owned.  Much of the rural lands are used for agricultural production.   Typically, these are on the windward sides of the islands, with better soils and more reliable rain.   When farmed effectively, they produce goods for local consumption, reducing the need to import fresh foods from the continent, which, despite efforts at controlling it, can be a vector for the arrival of alien species.  But when poorly managed (e.g. poor farms, no investment), these lands become centers for the establishment and propagation of alien weeds that end up overtaking adjacent park lands as well.  Common examples are the blackberry and cinchona (related to the plant that produces quinine - an anti-malarial agent).

But there is a risk in aggressively promoting local agriculture. A strong rural / farmer's voice leads to the creation of a robust  political constituency based on a growing demand for farmland.   In the dry season, it is not uncommon for dairy and cattle farmers to let their animals wander into adjacent park lands.   When confronted by park authorities, they can push back politically.   Local politicians make it hard for the park to maintain the integrity of the park borders in such times.    Having cattle wander around in park lands, dropping seed laden manure as they wander is an excellent way to spread invasive species in the park.   Moreover, as the population of Galapagos grows, there may be more pressure to release park lands to agricultural production

At the end of the day, while a vibrant and professionally operated agricultural economy may be good for the integrity of Galapagos ecosystems, unless it is managed in such a way as to respect the environmental constraints of the islands, it may end up doing more harm than good.   The governing council will need to keep a close eye on how things progress.

The governing council of Galapagos, 11 May 2018 - banning yogurt importations. 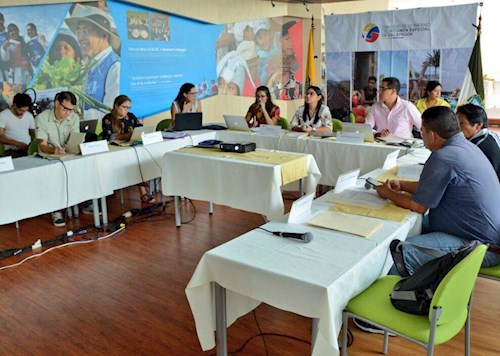