* Technically they are tortoises (land based version of turtles, which are water reptiles; e.g. sea turtles) but we took a bit of poetic license to generate a more eye-catching title for this news item...)

A group of 26 Galapagos tortoises is repatriated from Peru to Ecuador (Galapagos) after being retained by the National Forestry and Wildlife Service of the neighboring country on April 17, 2017, product of the alleged international trafficking of species.

These tortoises are part of the group of 29 chelonians retained by the Peruvian authorities, two of whom died during the alleged traffic and later one more due to natural causes.

The Directorate of the Galapagos National Park of the Ministry of Environment, approached the Peruvian authorities to carry out the genetic analyzes and confirm that they are giant tortoises of the Galapagos Islands, which, being protected species under the Convention on International Trade of Endangered Species of Wild Fauna and Flora (CITES), it was necessary to comply with international procedures for its return to the Ecuadorian archipelago.

This week, three park rangers from the Directorate of the Galapagos National Park traveled to Peru, where they removed the tortoises that were in the Cecilia Margarita Zoo in Piura, to begin the transfer to Lima, then to Quito and Galápagos.

The compliance with the legal procedures was possible thanks to the coordinated work between the Directorate of the Galapagos National Park of the Ministry of the Environment, Ministry of Foreign Affairs and Human Mobility, Embassy of Ecuador in Peru, Agency for Regulation and Control of Fito and Zoosanitary, Regulation and Control of Biosecurity and Quarantine for Galapagos, Galapagos Conservancy, and National Secretary of Customs; with the support of the Government of Peru, through the National Superintendence of Customs and Tax Administration, National Forestry Service and Wildlife, and National Service of Agrifood Health and Quality.

According to the requirements of the authorities, the tortoises remained under a protocol of quarantine and veterinary examinations, to rule out diseases, prior to their return to the country.

Wooden boxes specially designed for the transportation of the toirtoises, with estimated ages between three and five years, are used in the three-day journey that lasts until the final arrival in the Galapagos.

The park ranger Christian Sevilla, responsible for the conservation of insular ecosystems of the DPNG, explained that upon arrival in Galapagos, the tortoises will spend at least 180 days in a specially built pen at the Ecuadorian Air Force Base on Baltra Island.

The pen that will house the tortoises during the quarantine period is built on 16 square meters, has an outer cage that prevents any vertebrate: iguanas, lizards, etc., approaching the tortoises and another interior with all temperature and shade conditions that they need for their well-being, in addition it is covered with mesh, to avoid the entrance of invertebrates. This pen has a biosecurity area where the materials and equipment used by the park rangers who will take care of the chelonians will be kept.

The quarantine will allow the reptiles to eliminate seeds, while they will be analyzed to rule out possible risks of infection before reinsertion into their habitat and protect the turtle populations of the archipelago. 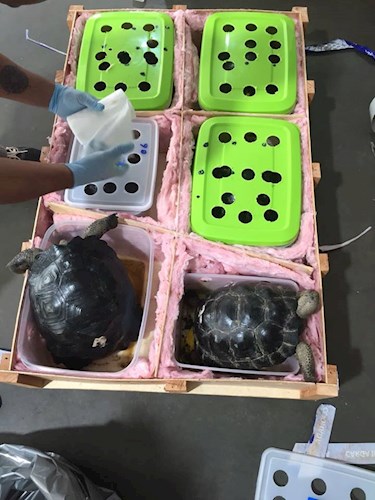