Our friend -- President of the United Nations General Assembly!

OK - so we I may stretch the truth a wee bit to get your attention.   But an old colleague of mine, Maria Fernanda Espinosa, was elected as president of the UN General Assembly last September.   I worked with her when she was the head of IUCN (International Union for the Conservation of Nature) South American office, and again when she was the Ecuadorian Minister for Heritage. 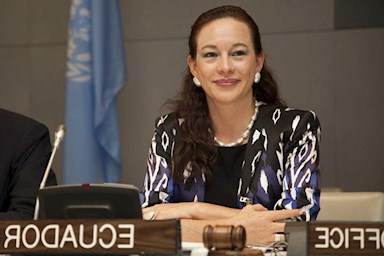 She's not the kind of friend I'd feel comfortable calling on when I'm next in New York, expecting her to drop everything to see me - but we did work on conservation and World Heritage issues together back when she was still en Ecuador, and when I was with UNESCO, and we did enjoy a tête-à-tête together at a fine Quito restaurant once.

Her career has been quite stellar in the past decade.  She has a Ph.D. in environmental geography from the USA.  In 2007, she left her senior IUCN job to take up a position as Minister of Foreign Affairs (quite a leap!).  She was also minister of National Defense, her country's permanent representative to the UN in New York AND Geneva.  She's also a recognized poet, having been awarded a national prize for her work.   She's currently once again the Minister of Foreign Affairs for Ecuador.   The role of President of the UN General Assembly is a temporary one, and consists largely of overseeing the management of the UN General Assembly meetings over the period of 1 year.  It's considered a high honour for a country to hold this position - and is usually conferred to countries whose representatives are well respected among their peers.   Bravo Maria Fernanda!