The Galapagos National Park is releasing over 1,000 land iguanas onto Santiago Island these days.  Land iguanas used to thrive here, until people brought over some pigs in the 1800's.  The pigs thrived and liked to eat iguana, giant tortoise and sea turtle eggs - they were experts at finding them.   From the 1970's on-wards, the National Park Service sent hunters to this otherwise uninhabited island to shoot pigs.  They would shoot hundreds and hundreds of them every year, but pigs being pigs, they would reproduce vigorously, negating all the efforts of the National Park Service.   As a result, the island had no more iguanas, and only had very old giant tortoises lumbering about.

When I started working in Galapagos in 1998, we adopted a new approach to pig eradication.   We used new GPS technology, and systematic poison baiting to ensure that every square meter of this 35,000 hectare island (nearly 100,000 acres) became vulnerable to the Park's efforts.   By the early 2000's, pigs had finally been eradicated.  We monitored the entire island for any trace of pigs for 18 months - and found none.  It was a huge conservation milestone.  Giant tortoises eggs would finally be allowed to hatch, and baby giant tortoises could reach adulthood for the first time in over 100 years.

It's another major milestone to have the Park Service re-introduce land iguanas to Santiago.   They are sourcing them from North Seymour island - which in itself is a great news story.  The North Seymour land iguanas were the last holdouts following their decimation on South Seymour (a.k.a. Baltra island, site of a US naval / air base in the 2nd world war and where the main Galapagos airport is located today).   With the Charles Darwin Research Station, the Park Service has set up a very successful breeding program - good enough to start sending some of the new iguana generations to Santiago island.

(all pictures from the Galapagos National Park Service) 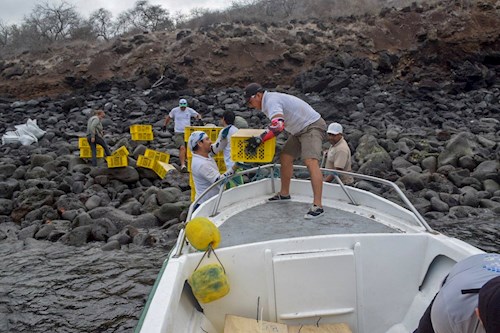 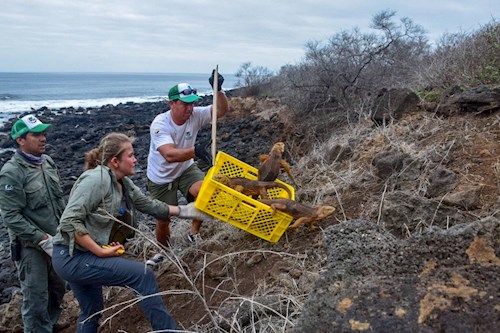 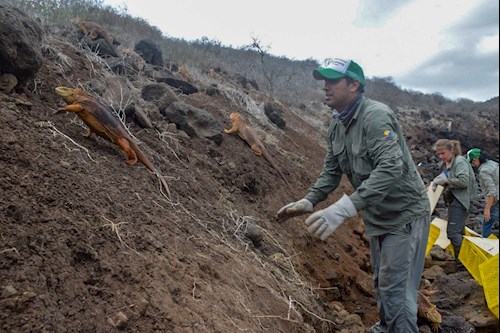