On national televesion, the president of Ecuador, Lenin Moreno, announced a series of measures aimed at improving the government's finances.   Over the past 10-15 years, the country took on a lot of debt, in large part guaranteed by future oil sales, in exchange for rapid improvement on national infrastructure, and social spending (teachers' salaries were improved for example).  As a result, it's currently finding itself in a bit of an ecoonic bind, forcing it to announce measures that will likely not be too popular.

Here is a Google Translate (with edits) of an article that appeared in yesterday's "El Comercio" daily newspaper, for those who are interested in reading more about it.

On a national network, President Lenín Moreno informed the population of the economic measures that will be in force on Tuesday, October 1, 2019. He began by mentioning that he will not raise the value added tax (VAT), which remains at the current rate of 12%. 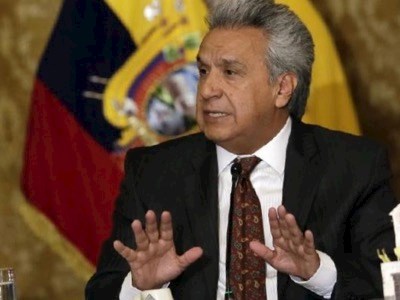 "Those of us who are going to ask for an additional effort are those who have the most," Moreno said and then said that those companies that receive income for more than 10 million dollars a year will pay a special contribution for three years. In this way, more than USD 300 million is expected, money that, he said, will be used exclusively for safety, education and health. Fuel subsidies are eliminated.

Through an Executive Decree, Moreno eliminated subsidies on diesel and extra gasoline. The Government spends around USD 1.3 billion in subsidies to these products. With the argument of “protecting those who could be affected by the measure”, he informed that 300,000 families will be added to the different social support programs managed by the State gives an will should will receive an additional USD 15 per month.

For the productive sector, the government offered to eliminate or reduce tariffs for machinery, equipment and raw materials and allow for automatic tax refunds for exporters. In addition, paying income tax in advance will be eliminated.

Also, import taxes on technological devices, such as cell phones, computers, tablets, etc. will be abolished.  Regarding labor measures, without delving into details Moreno indicated that a allowances will be provided for those who start a business, while measures will be but in place to in support of maternity and paternity leave, telecommuters and people on short term contracts. He clarified that the new hiring modalities will apply to new employees, while those who currently have an employment relationship will maintain their existing benefits.

The measures are also aimed at the public sector. In order to reduce the wage bill, Moreno indicated that the short term contracts will be renewed with a 20% less pay. In addition, vacation time will be reduced from 30 to 15 days. “The decisions I have made should have put in place decades ago. Many of my opponents, critics, and future candidates are not going to say it in public – but in private, they agree, ”concluded the President.

We've already seen negative reactions on Galapagos social media - particularly in regards to the elimination of fuel subsidies.  It's important to note that subsidies for tourist ships had been eliminated 10 years ago.   It's not clear if this will affect the bottom line of companies operaing just one or two small expedition cruise ships very much - we calculate that their annual sales are likely well below the $10 million cut-off for higher taxes.  Companies operating ships carrying 50 or more passengers are more likely to surpass that threshold - though it's not clear if this would apply only to $10 million in sales or in net profit before taxes.  In the latter case, they will likely not be affected either.