Quito residents come together to clean up the city

We asked our mainland extension specialist, Mercedes Murgueytio who lives in Quito, to report back to us on the day she help clean the city after the recent disturbances.   This is what she had to say:

On Sunday October 20th, I decided to join a group of Quiteños who were keen on helping clean up the city’s historic centre following the demonstrations that took place there earlier this month.   We participated in what is commonly called a minga, which is a type of grass roots community project for the common good and usually compensated with a meal.

What happened in recent weeks in the country caused a sad situation of destruction in the most important places of our beloved Quito, a UNESCO World Heritage city.  The demonstrators may have had some valid complaints, but some of them took it out on the city, tearing up pavements, spray painting walls, destroying property and leaving a big mess behind when they all left.   They had not considered that this beautiful old city really belongs to all Ecuadorians – that they were destroying their own heritage and part of their own history.

For the residents of Quito, it was very sad to see the poor condition in which the demonstrators left it! For this reason, I decided to participate in the “Minga by Quito’s Dedicated Residents”,  organized by a group of locals in Quito who wanted to contribute something to clean up and restore our beautiful historic center, an area that was greatly affected by the protests.

It was a very special and exciting day. It started very early in the morning, and, despite being a rainy Sunday, it was a day full of enthusiasm, solidarity and a general desire to tidy up our house. The streets were filled with people dressed in white who were walking towards our cherished historic centre.  All were wearing face masks to keep out the dust, and we carried sandpaper to erase graffiti, a jar of paint and paint brushes, brooms and shovels.   We headed towards the narrow colonial streets and began the work of cleaning up the city.  There were people who swept, others painted the walls, others collected rubble ... all help was valid and little by little our beloved city regained its beautiful image.

But not everything was just cleaning and work! The small shop keepers and restaurant owners in this part of the city were so glad to see us, offering either the traditional sweets or our famous paila ice cream, which was a real treat after a hard day's work.

Tired, but with a feeling of satisfaction for the work accomplished we returned home. There is still much to do, but little by little our city is regaining its beauty and splendor. 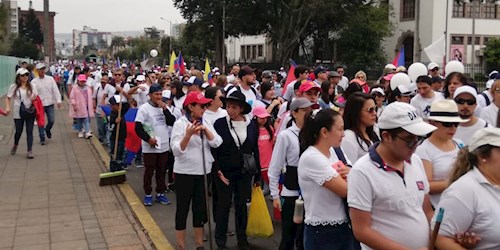 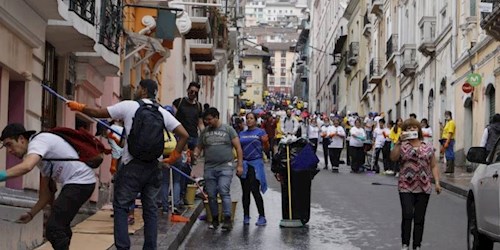 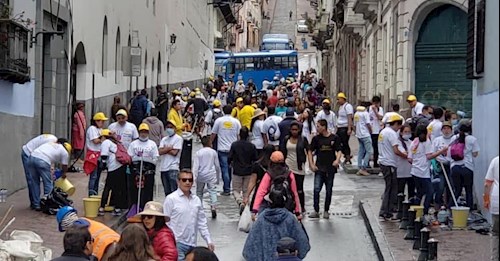