A small barge used to ferry containers between cargo ships and a local dock capsized yesterday as the crane used to load a container-sized generator tipped onto in.  It happened on the very northern end of the aptly called “Wreck Bay” in which the town of Puerto Baquerizo Moreno lies (San Cristobal Island). 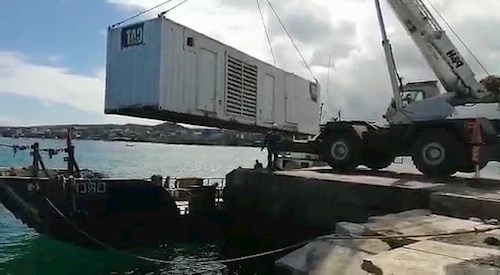 Authorities reported that a  total of 600 gallons / 2,500 litres of diesel fuel (i.e. 2.5 cubic metres – or about the volume of 1 large sized kitchen refrigerator) were spilled.    The government of Ecuador immediately activated its emergency response team to try to mop up as much of the mess as possible.

The town of Puerto Baquerizo Moreno is host to a large sea lion colony – one of the main attractions of the town’s waterfront.   Though the volume of diesel spilled is not particularly big, and the colony is located a fair distance from the spill, it could have serious effects on the sealions if they happened to swim into the spill area.    Mopping up the floating diesel slick as soon as possible is the best approach to dealing with the mess.   Typically, towel sized sponges are throwing into the slick and removed.   It’s not very high tech – and likely does not clean everything up, but thankfully, the warm waters and tropical sun help with the evaporation of most of what would not have been scooped up within 24-48 hours.   Despite the small size of the spill and its relatively short term duration, localized impacts on the immediate shoreline ecosystems (e.g. crabs and such) will be felt.

This spill should not have any effect whatsoever on visitor experiences in Galapagos, though it’s a reminder of how easily these things can happen.   Puerto Baquerizo Moreno has witnessed a few larger shipwrecks in recent years, as cargo vessels have been prone to run aground on the shoals just outside of town.   See our 2015 news item on one such incident here.

For a video of this dramatic event, click here.