20% growth in land-based tourism last year - can this continue?

The Galapagos Park and the Galapagos Tourism Observatory released the tourism numbers for 2018 yesterday.  The numbers show the entrenchment of very high, most likely unsustainable land based tourism growth in the islands.  In 2018, a total of 275,817 people travelled to the Galapagos islands as tourists, up 14% from 2017.

It’s important to note that there are two tourism models in Galapagos:

i) Land-based, whereby visitors stay in hotels/hostals/B&Bs/camping sites and

ii) Ship-based, whereby visitors live on an expedition cruise ship during their stay.

Until 2015, the statistics were gathered for both ship- and land-based numbers.  For an unknown reason, the Park stopped making the differentiation in 2016.  But by extrapolating from data between 2007 and 2015, we’ve made the conservative assumption that annual ship-based visitation from 2016 to 2018 has remained flat at 72,000 (see chart below). 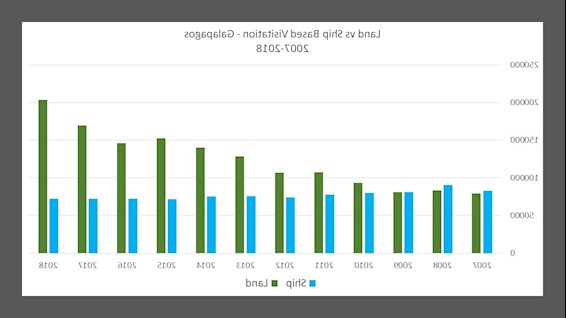 Land-based tourism was virtually non-existent until the mid 1990’s. It took off with the support of information sharing over the internet. The few land based tourism pioneers who first blindly ventured to the islands started sharing their information for the whole world to see, posting on various on-line traveller discussion forums. “Doing Galapagos on the Cheap” and “Galapagos Islands – Detailed Guide for Land Based Travellers” have been two of the most active discussion groups on the TripAdvisor Galapagos Islands forum. It became very easy to get all the answers to your questions when considering a land-based visit – and the numbers took off. 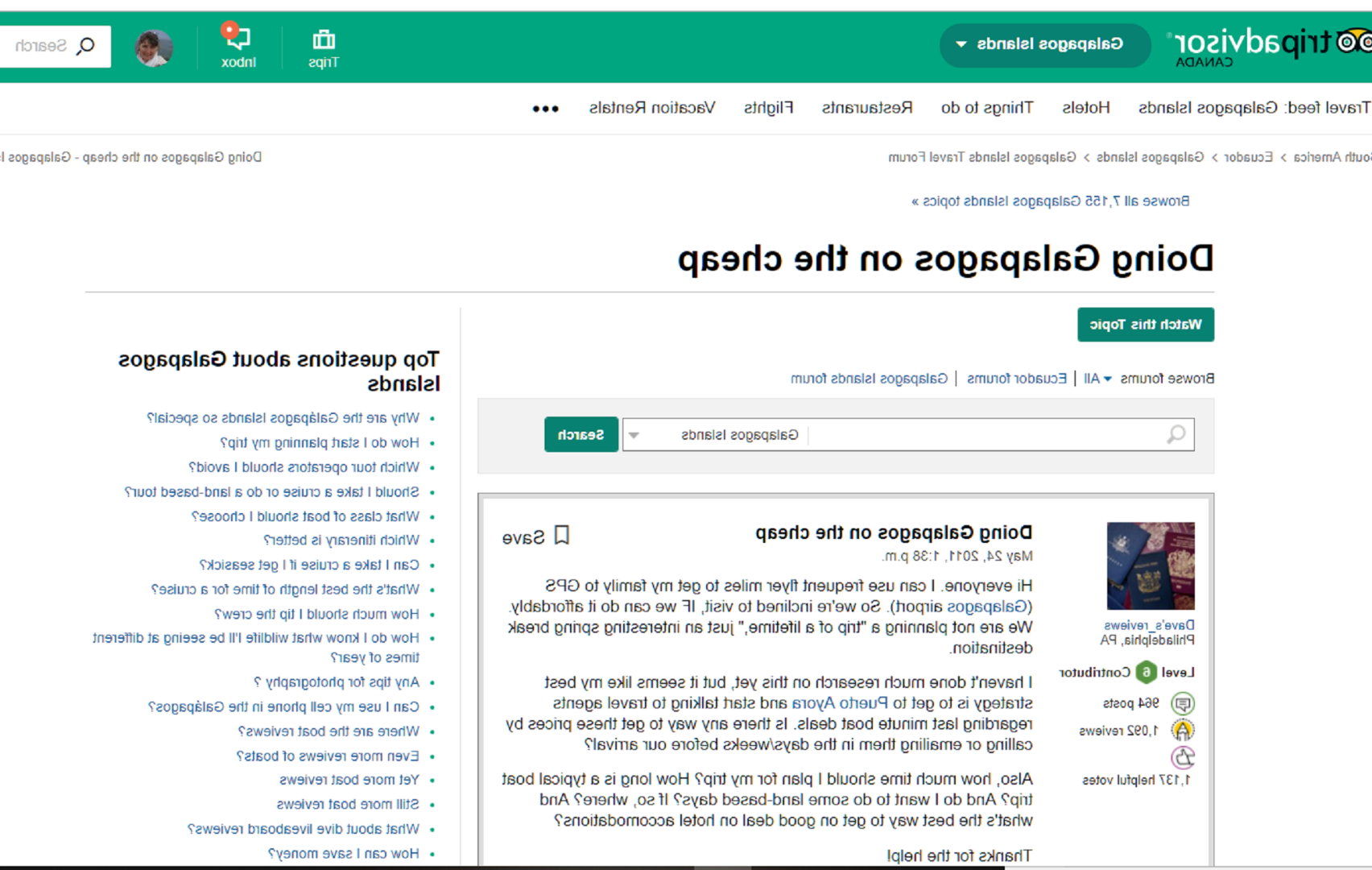 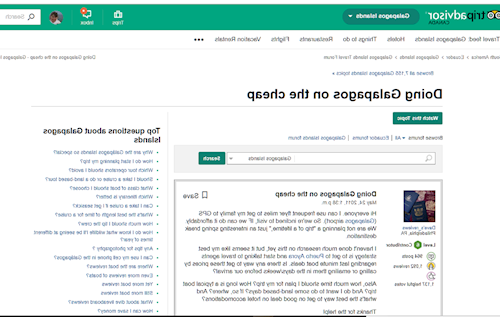 A bit of context: At the request of the government of Ecuador, Galapagos was added to the UNESCO World Heritage (WH) list in 1978 (the first ever WH site) in recognition of its unique wildlife and how it helped illustrate biological evolution in action. Under the terms of the WH Convention, Ecuador committed itself before the community of nations to conserving that wildlife in perpetuity for the benefit of humanity (that’s the purpose of the WH Convention). The concern is that unlimited tourism growth will eventually conflict in a serious way with wildlife conservation.

Beyond habitat destruction, the main threat is the introduction of alien species, which prey on native species, compete with them or bring in new diseases or parasites. The more you have people living in the islands and having people and cargo moving back and forth between them and the continent, the greater the risk of bringing in destructive alien species. What would Galapagos be without the giant tortoise, the marine iguana, or Darwin’s famous finches?

UNESCO’s WH Committee (a group of 21 countries who act as de facto “bouncers” for the WH club) has been monitoring Galapagos, as it does all WH sites (I led that monitoring effort from 2003 – 2012).  Already in 2007, it expressed concern over the rapid growth of tourism and the absence of any clear tourism management plan.  It reiterated its concern in 2016 when it saw that numbers kept on growing relentlessly.  It asked the Government of Ecuador to report back on what it was doing to deal with the issue.  The Committee reviewed the situation again in 2018.  Last June, in the absence of any tangible progress on the matter, it continued to express its concerns over the apparent absence of a tourism management plan.  It has asked the Government of Ecuador to report back by the end of 2019 on the matter.

Residents feel they are losing out

Ironically, a review of local Galapagos Facebook group discussions shows that residents believe land- based tourism is down – that very little money is staying in the community. The most vocal participants in the FaceBook groups promote the illusion that ship-based tourism scoops up all the tourism dollars, leaving none for the community (when in fact, it can be shown that nearly 10% of the working age population of Galapagos is closely linked to the ship-based tourism sector as employees, owners, service providers etc.).

Part of the reason that some locals are still feeling out of the loop is that a large proportion of land- based visitors are low to very low budget travellers, looking for the $5 meal, the $20 bed, the last minute day trip at reduced prices and seeking out the activities that have no cost (e.g. beach, swimming holes, hiking). While a ship based visit might cost $500 to $1000 per person / day, a land based visit can be had for $50/day if one is singularly focused on thrift. The average ship-based visitor likely leaves more money in the local community in the form of well paid jobs (and tips – don’t forget to tip well for good service…) and profits to owners than perhaps 10 land-based visitors. 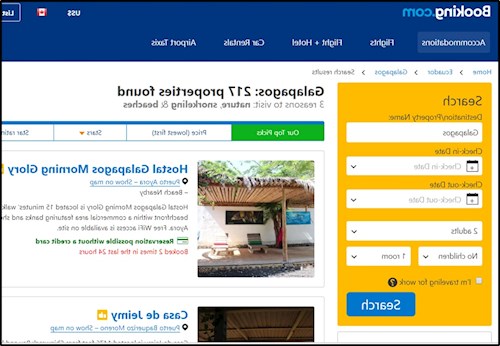 Meanwhile, in anticipation of great profits to be made from land-based tourism, one may be forgiven in concluding that that every resident in Galapagos has opened up a t-shirt shop, a travel agency, a rooming house or a snack bar – the vast majority of the “mom & pop” variety. The Ministry of Tourism reported an increase in the number of hotel/rooming house type establishments from 73 in 2007, to 291 in 2015.

Besides the formal establishments, a brief visit to Booking.com or Airbnb.com gives one the impression that everybody is renting out rooms in their homes for tourists.  A good number of our friends in the islands are certainly dipping their paddle into that stream – how can you blame them? But there is obviously an oversupply, driving prices down.  It’s no surprise that the reported occupancy is in the 30% range – meaning most people likely don’t get a big return on their investment (no matter how small).   It’s also no surprise that these people are pushing for yet more land-based tourists in order to fill their establishments. 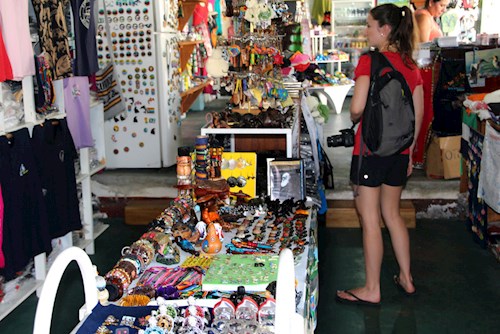 The local political pressure to keep tourism numbers growing is strong.  Any initiative that might be seen as putting a damper on land-based tourism is resisted.  The park entrance fee has been $100 since the late 1980's. At that time, $100 was about 10% of the price of the average 1 week cruise.  Today, $100 is about 1.5% - 2% of that price (significantly less than what one is expected to leave in tips!).  Since 2015, responsibility for setting the park fee was transferred to the Galapagos governing council.  Though there is every technical justification to at least double, if not triple it, the political consequences of doing so are considered very unfavourable – and hence it remains at $100.

While land-based tourism takes place in a bit of a “wild west” regulatory environment (particularly in regards to controlling numbers) ship based tourism is highly regulated (the Government of Ecuador receives many well deserved compliments over its work on managing ship based tourism).  The total number of ship-based beds has been capped for over 20 years.  No new ship is allowed to operate in Galapagos unless a ship of similar size is retired.  This model has contributed to a healthy ship-based tourism industry in many regards:

• Environmental impacts are understood and managed.   Improved regulations have actually reduced the impact over the years.
• Visitor experience quality is maintained - no crowding at visitor sites, wildlife is not driven away.
• Overall quality and maintenance of ships is significantly improved.
• Skills and professionalism of ship crew have improved over the years.
• Steady, well paid jobs are provided for many Galapagos residents.
• Ship servicing sector in Galapagos is robust (maintenance, food supply logistics, bookkeeping…).

Today, you’re a lot less likely to share you bed with cockroaches, to have staff making passes at female passengers, to suffer through engine breakdowns or to have gastro-intestinal problems than was the case 20-30 years ago.

A limit on the number of park entrance permits?

Though land-based tourism can offer a good and more budget friendly alternative approach to seeing the Galapagos, it remains very poorly managed. Too many locals are chasing too few dollars from too many low end visitors. False expectations are created, and the cycle continues as nothing is done to put a cap on numbers. More people get in on the action, further over-supplying it.

Restricting the number of land-based visitors (as has been successfully done for ship-based visitors) along with establishing policies promoting local ownership would help tighten the market and support the local economy.  Prices would go up, resulting in more money to invest in staff, training, infrastructure and more.

The authorities are currently trying to restrict land-based tourism by insisting that anyone arriving in the islands must show proof of accommodations. They want to discourage the happy-go-lucky “I’ll-sleep-on-a-couch / find-me-a-cheap-last-minute-deal” type of visitor.  This approach, technically in place for the past few months, is not yet being enforced.  Even if enforced, smart folks on internet travel forums are already advising on how to get around such restrictions (you book a place on booking.com, you print your reservation, you cancel the booking - presto! You have evidence to show that you've pre-booked a hotel).

It’s time for the Park to seriously consider putting a cap on the total number of park entrance permits sold each year.  275,000 permits were sold in 2018. If the cap could be set at a point that doesn’t cause an instant local rebellion, while at the same time clearly identifying an end point to growth, good things could happen.

The Park could ensure a more even distribution of visitors throughout the year (no more high season panic, low season famine).  It would need to work with hotel / ship owners / tour operators to establish a fair system of entrance permit quotas.  A secondary market to ensure fluidity / flexibility could be encouraged. It would be complicated, but with some concerted effort, and consultation with the interested / affected parties, a sophisticated system could be established.  The objective would be to at once set a limit on the total number of visitors while allowing for a healthy entrepreneurial environment to flourish.  Under these conditions, we could expect a gradual improvement in overall quality of infrastructure and service. As the market tightened, prices would increase, and capital for investment in staff, training an facilities became more readily available.

What do we really really want?

The final goal would be the establishment of a healthy, quality land based tourism industry from which all determined participants (employees and owners) could have expectations of a reasonable living, while at the same time keeping an eye on the long term conservation of this iconic World Heritage site.