(Today, February 12th, is “International Charles Darwin Day”, marking Mr. Darwin’s birthday in 1809. We’re marking this great day to tell the story of the Pinzon Giant Tortoise’s return from the brink, just a few years ago.)

Pinzon is among the smallest of the main islands that make up the Galapagos archipelago.  Located just about in the geographical centre of the collection of 12 or so larger islands, Pinzon is 1789 hectares (about 4470 acres) in size – think of a round island that’s about 5 km in diameter (about 3 miles). 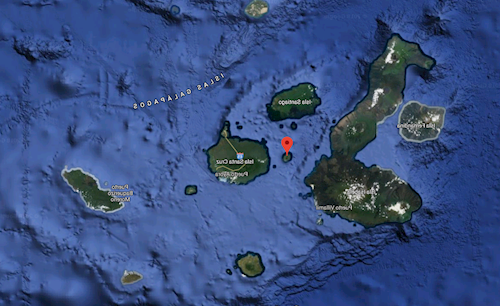 Pinzon island - in the centre of the archipelago

But it’s tall for such a small size.  With hills reaching  458 metres (1,503 feet), it’s a very rugged place, populated by the infamous “uña de gato” (cat’s claw) tree (xanthoxylum fagara). It’s eponymous thorns seem to reach out to you at all times, just like those of a cat feeling a bit too playful.

I had the “pleasure” of taking a hike on it back in 1998 – we had a team of three machete wielding park staff with us to forge a trail no longer than a few hundred meters – which took a good 30 minutes to create.  I was in the company of Dr. Linda Cayot – the woman who played a key role in establishing and operating the highly successful giant tortoise breeding program at the Charles Darwin Research Station / Galapagos National Park Service, starting in the 1980’s.  We were there to check on the status of the tortoise population.

Though the cat’s claw makes the going very difficult for humans venturing onto Pinzon, it did nothing to stop Black rats from thriving there.   Introduced to Pinzon in the 1800’s (by accident most likely as ships anchored and people moved back and forth to the island), the rats quickly learned to feast on tortoise hatchlings.   In no time the rat population skyrocketed, marking the end of the ability of the giant tortoises of Pinzon to successfully raise new generations.  Though they kept on laying eggs, by the 1900’s, scientists estimated that zero hatchlings survived the rat predation into adulthood.

The not yet "giant", giant tortoise makes for a great rat snack

It wasn’t until 1965 (just when the Galapagos National Park was being created, along with the Charles Darwin Research Station), that efforts were made to do something about it.  By then, Pinzon island was populated only by middle aged and geriatric tortoises.   There were few tortoises younger than nearly 70 years.  Scientists gathered eggs before they hatched and took them to the newly created tortoise breeding / egg hatching centre on Santa Cruz Island, at the Darwin Station and Park headquarters.

In 1970, 20 juvenile tortoises, now big enough to be able to resist attacks from rats, were returned to Pinzon island.  In that year, scientists estimated the total population of island-born tortoises on Pinzon at only 150 – 200.   By 1990, that number had dropped to 80-100 - the Pinzon giant tortoise had been racing towards extinction.    Thankfully, the off-island breeding and repatriation program was well established by then, with a total of 268 off-island juveniles having been taken back to the island.

Still, the on-going presence of rats meant that should the ability of the park and Darwin Station to keep on “seeding” the island with juveniles ever wane, the tortoises would eventually be doomed.  Getting rid of the rats was the ultimate end goal – but the task was daunting.   The first attempt took place in 1988.   A team of about 45 people spent over two weeks planting rat poison and traps throughout the island in an effort to kill every single rat there.   The attempt ultimately failed for lack of resources to maintain a continuous effort, and for the inability to effectively cover every part of the island.

It was only in 2012 that a large scale systematic eradication effort was once again attempted.  With the help of GPS technology, the team (Park, Darwin Station, Island Conservation and others)  was able to disperse rat poison uniformly throughout the island, leaving no area safe to rats.   By December of that year, all indications pointed to the complete absence of rats.  It was in December 2014 that the first baby tortoises, born naturally on Pinzon, were spotted – a first in over 100 years.  To be safe, the team returned regularly to check for the presence of rats.  On each visit, they found no trace of any rat, allowing them to declare the island “RAT FREE” in early 2015.  The great conservation news story was shared around the world.

As we noted in a news items a few weeks ago (click here for details), the same effort is being made today on North Seymour island.   Home to many bird colonies, North Seymour also has plenty of rats that wreak havoc on eggs and nestlings.   This time, drone technology is being used to disperse the rat poison uniformly throughout this small, flat island (this one is flat and only 190 hectares – 470 acres).   After Pinzon, this should be a walk in the park for the people carrying out the work.   It’s expected to be completed just about now – fingers crossed!