An exciting news story was broken today by the Minister of the Environment for Ecuador:  A female Fernandina island tortoise (Chelonoidis Phantasticus), long feared extinct since the last one was captured in 1906, was found this week.  The tortoise was removed from the island and taken to a nearby tortoise breeding centre.

The...only Fernandina tortoise ever collected, was found alive in 1906 by Rollo Beck of the California Academy of Sciences. No other Fernandina tortoises have been documented since, but in 1964 helicopter-assisted surveys of remote areas on Fernandina documented several large tortoise scats and a few Opuntia cactus pads with tortoise bite marks at a location 6 km from the shore at an altitude of 360m, and in 2009 an airplane survey of the inaccessible higher-altitude forest habitat surrounding the central volcano cone yielded a possible unconfirmed sighting of a tortoise, while in 2013, during vegetation monitoring, a scat and some footprints were found. These sightings and signs, though needing verification through more extensive surveys, indicate the possibility that the species may remain extant in exceedingly small numbers.

Clearly, IUCN's webpage will need to be updated now. 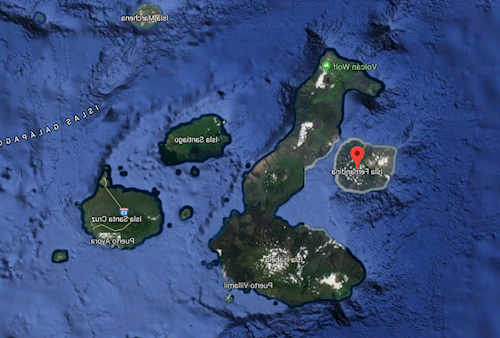 Fernandina island is the youngest of Galapagos islands, having risen out of the sea due to volcanic activity about 1 million years ago.   Most of the island is comprised of  near sterile lava fields, but there are some relatively large expanses that are covered with vegetation.  Tortoises would have had to colonize this island by having been swept away from another island and drifted to its shores. 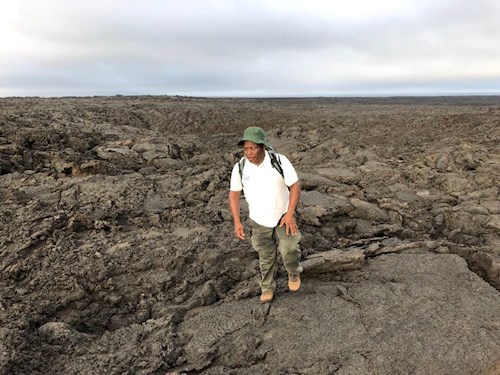 Most of the island is covered in sterile lava fields - a member of the expedition.

It's not inconceivable to imagine that sudden tectonic activity would have rapidly pushed an shoreline rich in giant tortoise habitat underwater, resulting in dozens or more giant tortoises floating off.   One such massive and rapid shift in the sea bottom in the 1950's resulted in several hectares of new land emerging from the sea overnight - you can walk on this new land at Urbina Bay, a visitor site. 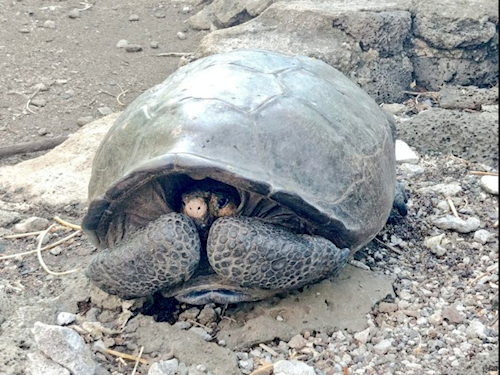 The new find - wondering what all the fuss is about.

Scientists and conservationists have long suspected that the Fernandina island tortoise still survived.  The evidence described above was tantalizing and spurred more than one tortoise-finding expedition over the years.  The members of this recent expedition get to claim a very much sought-after prize.  I can just hear them now at the bar "I was on the expedition that discovered the long lost Fernandina giant tortoise!". 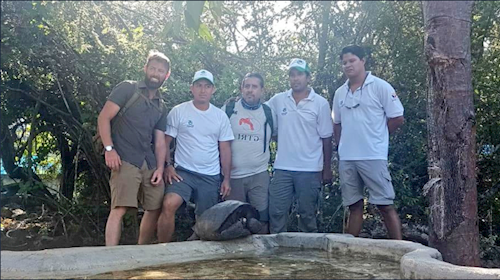 At the centre, Washington (Wacho) Tapia, and 2nd from the right, Wilson Cabrera - some of my former colleagues

There are 12 species of giant tortoise living in Galapagos.  Taxonomists have argued amongst themselves over whether or not these were all distinct species, or simply sub-species.  The "splitters" won the latest round of that argument (e.g. those who are keen on seeing more distinct species, rather than just many sub-species lumped together under a broad species - a.k.a the "lumpers").  One of the things I learned while working with scientists in Galapagos was that the line between two different species, versus a species and a sub-species was not a scientific one - but rather one of debate.  This debate is a graphic illustration of the mutability of life - two different species are not separated by a hard line, but rather, represent the ends of a continuum of intermediary specimens which, at one point, end up blurring the species divisions altogether.   Galapagos tortoises are a good example.

The next step will be to determine if the female was not alone, and to see if there is a viable population on this volcanically active island.    More good news to follow, we hope!