Michael Bliemsrieder: "Our Man in Galapagos"

The big day is on March 24th when Galapagueños go to the polls to elect their mayors.  There are three municipal governments in the archipelago – and Santa Cruz, where 75% of Galapagueños live, is the largest by far. Michael Bliemsrieder is in the race.  My former office mate, the tall, handsome and charming German-Ecuadorian has been a presence in Galapagos since the 1990’s.  He’s had an interesting time in Galapagos.

For a period, he worked for the Galapagos National Park in various positions, ultimately becoming the Deputy Park Director.  His dedication to the job almost landed him in jail.   Following an investigation on the illegal fishing and commercialization of sea cucumbers (in the star-fish family - and highly prized on Chinese menus), Michael discovered a large amount of these spiny creatures drying on the roof of the provincial member of parliament’s house, Fanny Uribe.   Ms. Uribe, a fiery and dogged politician[1], vociferously berated him and threatened him with a legal challenge.  She hoped to have him withdraw his accusation and to distract attention away from the sea cucumbers drying on her rooftop (some thought the lady did protest too much...). 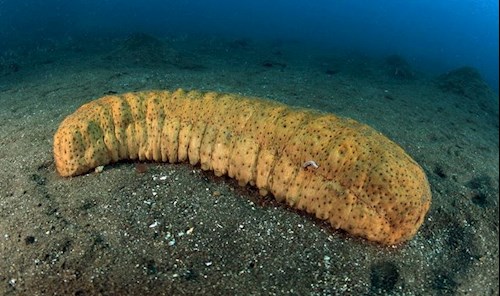 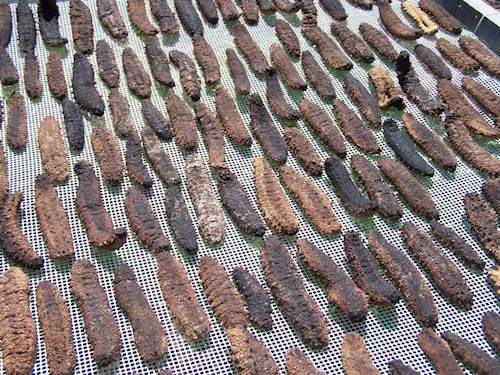 Sea cucumbers - as they would appear, say.... like drying out on someone's roof

Michael had to leave his post at the National Park and ended up sharing my office at the Charles Darwin Research Station, where he was managing various conservation projects.   Always energetic, positive and welcoming, Michael was a dedicated member of the team and fun to share an office with.  He assumed his new responsibilities with enthusiasm and dedication, developing new ways of measuring project progress and reporting back to donors[2].   Beyond the strict boundaries of his job, he also provided valuable administrative support to running the Darwin Station.  He was quite well liked by the ladies – I found myself frequently having to take messages from women knocking on our door, looking for Michael.

A few years later, Ms. Uribe, still in office and still simmering from the sea cucumber affair, once again went after him. Fearing for his freedom (in Ecuador, it’s relatively easy to place someone in preventive detention while an investigation takes place – one that could last for months or even years…), Michael left the country.  Being fluent in Spanish, English and German, he had no problems getting about overseas. 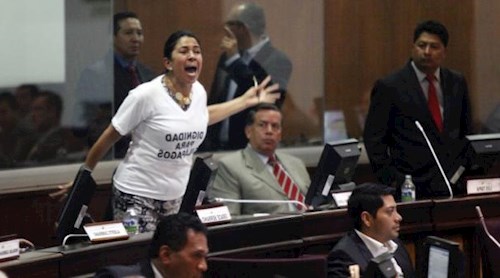 Ms. Uribe in action at the national assembly

He spent the next 10 years working in the US, in Cuba (as Head of the World Wildlife Fund's country office there), and then with the WWF in its Ottawa office in Canada, handling the Greater Antilles conservation projects file.   Though he retains a soft spot for Ottawa and still misses the snow, I think it’s the winters that compelled him to eventually return to Ecuador, where he began working as a consultant, heading up his successful conservation / project management business.

He started engaging in politics at the national level, recently aligning himself with the Pachakutik party, which presents itself as an alternative to the old mainstream, “business as usual” parties in Ecuador.  A bit left of centre, and keen on inclusiveness, Pachakutik has now been around for over 20 years, but has yet to hold power at national or provincial jurisdictions.

His platform for the upcoming Santa Cruz elections focuses on a strong technocratic approach to municipal government, relying on the results of non-partisan technical studies, on clear-eyed understanding of financial realities and with an eye on the fiscal challenges facing the country[3].

Some of the issues being raised in his campaign is the perennial lack of a potable water supply in Puerto Ayora, the main town.  The out-going mayor has spent large sums on dealing with this issue, yet has had no tangible results and the locals are very keen on getting this issue resolved.   Michael has also expressed a desire to have the national government focus more on the quality of medical care at the local hospital, and less on the fancy designs of the new building that’s being proposed.    An infant recently died in the Puerto Ayora hospital due to, the parents claim, poor treatment.  Townspeople are organizing a march this Friday to raise the profile of this issue.

There are 10 candidates in the Santa Cruz mayoral race.   And who do you think is among the top contenders?  None other than Michael’s old nemesis, Fanny Uribe.    After being voted out at the national government level, she returned as a Galapagos provincial assembly politician in 2004.   When the provincial status of Galapagos was revoked in 2008, Ms. Uribe was once again out of a job.   She ran in the 2009 Santa Cruz mayoral race – unsuccessfully.   She tried her luck in the 2013 national elections, this time with better results, winning the Galapagos seat, and headed back to Quito, the nation’s capital.   She once again was out of a job after the 2017 national legislative assembly elections.  But like a boomerang, Ms. Uribe keeps on coming back to the electoral platform.

It definitely is a race between the old school, give-them-free-t-shirts and yell-out-in-fiery-indignation politicking embodied by Ms. Uribe, and the emerging sober-minded, facts-based approach promoted by Michael.   We look forward to election day, hoping that “our man in Galapagos”, Michael Bliemsrieder, wins the race.

[1] I had the pleasure of having had a private meeting with Ms. Uribe while she was a provincial leader, and while I was on a United Nations investigative mission to Galapagos, monitoring this World Heritage site’s state of conservation.

[2] I attribute my job at UNESCO in part to Michael’s great reporting formats.  UNESCO was funding the project he was reporting on – and when Michael left the Darwin Station, I took over.   I continued with his reporting format which, in hindsight after having worked at UNESCO and received reports from other project managers, was the best by far.  I’m sure the UNESCO folks responsible for hiring me had associated me with the great reports!

[3] Ecuador, a US dollar country, relies heavily on oil exports to fill the state coffers.  It has sold a good deal of future oil production to China in exchange for advances which were invested in large infrastructure projects and in the improvement of working conditions for teachers, among other things). Michael scanning the horizon, preparing for the future...