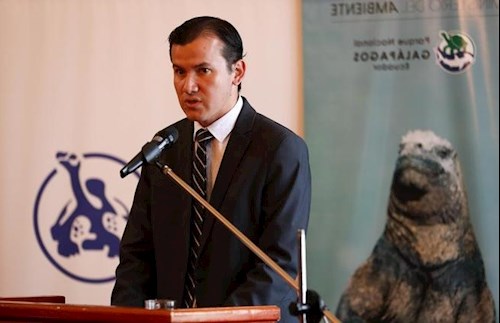 Jorge Carrión (above) was hired as the director of the Galapagos National Park in March 2018 (see our news story here).   It's not an easy job.  He has to deal with major issues with international political ramifications (such as the capture of a huge Chinese fishing vessel full of protected sharks in its hold) to the day to day entreaties of locals (such as a cattle farmer wanting to let his cattle roam in park lands during a dry spell).

Galapagos is also a bit of a pressure cooker when it comes to small town and national politics, family feuds, petty jealousies and resentment.

Mix all of this and throw in the "vomitorium" of social media, and in no time, the Park Director becomes the target of demeaning innuendo and outright fabrications on the part of anonymous posters.   Being such a small town, rumours develop and spread like wildfire.

This morning, Jorge Carrión decided to respond.   He published the following piece on his FaceBook page (thank you Google Translate for saving me the effort of translating it myself into English).    I thought that people interested in a Galapagos trip - or those already having been on one, would appreciate getting a glimpse the other side of life in Galapagos.

Dear colleagues, friends, and family, it is painful for me to have to point out certain information through this medium, but in view of some malicious publications and of the respect that the people who know me and esteem me deserve. I feel obliged to do it.

I come from a humble and hardworking family, my parents knew how to instill honest work and gave me the education to learn to tolerate and respect everyone, even those who do not deserve it.

Until I was 29 years old I was exclusively studying, preparing myself to serve my land. In 2012, recently graduated, I had the opportunity to fulfill one of my dreams, to work in the Galapagos National Park (PNG). Although I arrived with the highest possible academic degree, I started as an Environmental Quality technician in the PNG, a position I held with a lot of responsibility and delivery. I firmly believe that my performance was rewarding and I was attending to greater responsibilities and new positions, from environmental quality, applied research, climate change, Director of Environmental Management, to the present that I serve as Director of the Galapagos National Park.

The fact of having started from below, even as a volunteer of the Galapagos National Park, has given me the opportunity to get to know the institution and its people, the daily efforts well beyond the working hours, and most importantly, I have been recognizing and identifying the objectives of the institution as my own, since I wish with all my heart, to leave a legacy for my children.

My arrival at the Directorate of the Galapagos National Park has not been improvised, it has not been the product of any business or treatment of any kind, it has been the product of my sacrifice and that of my family. Therefore, I totally repudiate the attempts of discrediting me, drawing hasty and ill-intentioned conclusions. Any insinuation or damage to my integrity will be defended in law, because by suspicion, my name can not be involved or that of anyone else.

Today, as head of the Galapagos National Park, I am involved in the investigative process that seeks to clarify the disappearance of the giant tortoises (Ed. see the CNH news story on this here), the research process that I requested and supported from the beginning and that still support and impulse, because the main objective is to find those responsible and that the competent authority can sanction them as the law establishes.

To the relevant authorities, all possible facilities have been provided so that they can carry out the necessary investigations – I am interested more than anyone in being able to identify the culprits of this event. I do not intend to participate in the unethical games of responding to information coming from fantasized and unoccupied minds, and from resentful hearts; each one is the owner of their actions and must respond to the competent authorities in their respective moment.

Finally, I make a call to team spirit - we are a relatively small town in which team spirit should prevail and of course honesty. If we have evidence of an act of corruption, give the evidence to the authority so that those involved are punished, but do not share this information without being sure that it is true and even more damaging the honor of honest people.

Greetings to all. Excellent day.