We were honoured to have hosted the McAlister family from Ottawa for a Galapagos cruise last December (parents, two sons and a significant other).  After the usual initial exchange of emails, they approached us about the possibility of having their son and his girlfriend/fiancée get married in the islands.   That was a challenge we got excited about.

The family was scheduled to sail on the Samba - the ship we charter frequently and with whose owners (a Galapagos family) we've developed a very close relationship over the past 15+ years.   We contacted the Samba and the immediate answer was "No problems!  We'd love to do something on board!".

Apparently, the couple in question was not disappointed.   On their return home, the happy parents effused over the magical aspect of the experience.   They showed us pictures and shared with us how the ship's crew had literally gone "overboard" to make it a special event.    We asked them to write up a short description for our news page.   Here it is:

“You want to get married where?”, asked the incredulous parents. They were delighted about the event, although a little unsure that a small island in the Galapagos was the right location. But it was not just right. It was perfect.

At 5 p.m. on a sunny December afternoon, we gathered on the magnificent crescent beach on Bartolome Island with the dramatic Pinnacle Rock in the background. There could not have been a more ideal setting for the wedding of our son, Nicholas, and his beautiful bride, Lindsay.

Captain Jose of the Samba performed the ceremony with great poise and dignity, accompanied by the entire crew-- all resplendent in their crisp white uniforms. Juan, our amazing naturalist, drove the wedding Zodiac, delivering the wedding party safely to the beach. As it was a wet landing, footwear was greatly simplified-- bare feet in the soft sand. The wedding was witnessed by sea lions and the other seven enthusiastic passengers on the Samba. After the ceremony, Juan piloted the happy couple on a cruise around the bay as the sun was setting. 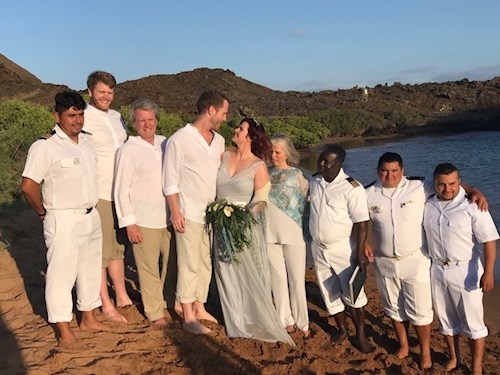 The crew played its part - dressed in whites and at attention. 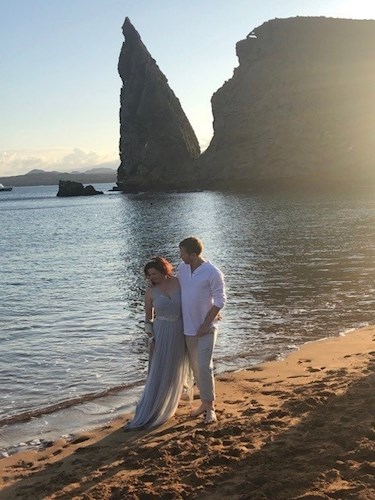 Sunset on Bartolome beach with the iconic pinnacle rock..No need to spend anything on fancy shoes

No wedding ceremony would be complete without champagne toasts. The front deck of the Samba provided a unique backdrop, as the disappearing sun coloured the sky a bright crimson. Accompanied by the gentle sound of the waves, the wedding waltz was lit with soft rays from the moon and stars in the southern sky. 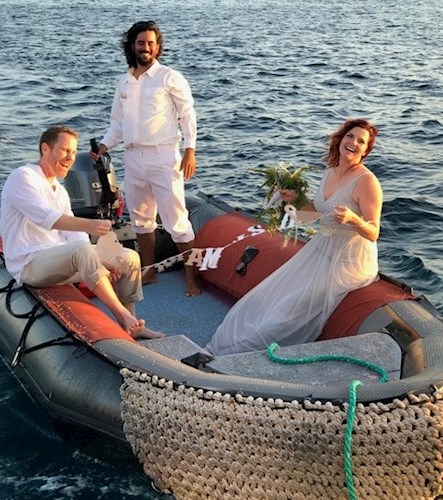 "Galapagos limo ride" (this being a national park, the bouquet is actually made of plastic flowers...)

There followed an exquisite wedding feast complete with a cake designed and baked by the brilliant chef, Angel, in the Samba’s galley. A fitting end to a perfect wedding day. 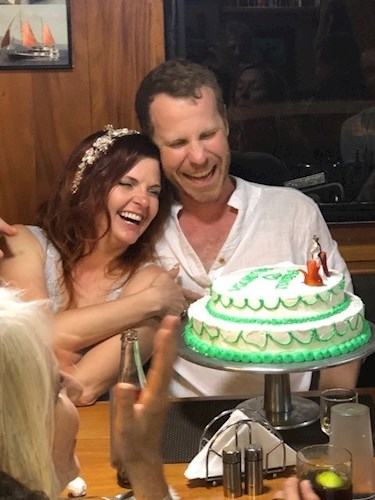 A Samba special wedding cake baked on board