In our 13 September 2017 news item, we asked an Ecuadorian environmental lawyer, Hugo Echeverria, to detail the case for us.  He reported on the seizure of a Chinese fishing vessel full of shark carcasses, sailing through Galapagos marine reserve waters.   Though it was not proven that the sharks had been fished in the reserve, authorities arrested the ship's crew and impounded the ship solely on the basis that it was transporting endangered species in Ecuador - an illegal act there.

The Chinese fishing company contested the decision and appealed lower court rulings.  The case finally made it to the Ecuadorian Supreme Court - and its ruling was made earlier this week.

It ruled that lower court decisions were to be upheld.   The ship remains confiscated and the captain and crew received prison sentences from 1 to 4 years.

When this case went to court, many believed that a combination of Chinese pressure and a malleable judiciary would have resulted in the ship and crew being released in exchange for a small penalty.  But in recent years, the court system has been strengthened, and perhaps its resolve was also boosted by the unprecedented public manifestations of outrage and anger at what was widely perceived as an outrageous affront to Ecuador.

The take away:  Ecuadorian law in regards to the protection of endangered species has teeth and will be upheld at the highest level.  Don't get caught transporting protected species.

Over 6,000 shark carcasses, mostly endangered species, were discovered in the ship's hold 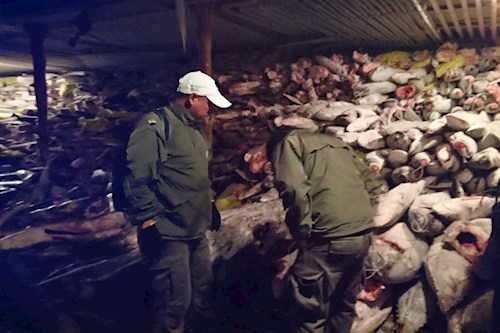