A Dog's Life in Galapagos

Dogs are mammals.  Mammals were not very successful in colonizing the Galapagos archipelago.  Remember, these islands appeared out of the sea over a hot spot in the Earth’s crust.  They first emerged as molten lava and over a few million years, they grew into a collection of islands.   So, in the very beginning, the Galapagos was a sterile area with absolutely no life on them, not even microbes. 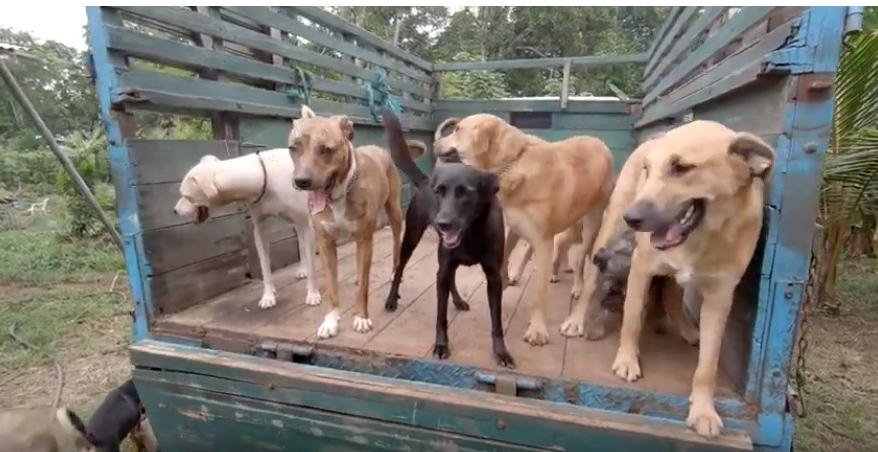 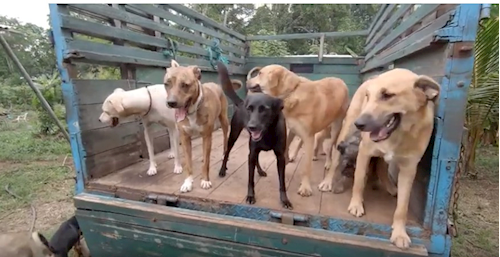 As things cooled down, it became possible for life to at least stop for a visit.  No doubt sea birds were the first to set foot on them – and maybe even find some nesting sites.   Long distance seabirds might even have brought a few seeds of robust plants from the mainland in their guts (or stuck to some feathers), and lo, plant life would have first appeared.  Mangrove seeds, carried by ocean currents, would have show up too, leading to coastal mangrove forests.   Then, over thousands of years, maybe some insects, blown high into the atmosphere, drifted over; and even a few land birds would have established themselves, blown off course during sudden tropical storms.

Larger, non-airborne animals would have had a tougher time getting there.  1000km/600 miles is a long way to swim.   The only way for most of them to have made it would have been by floating on vegetation rafts – the kinds that are built up after tropical rainstorms flood coastal plains, causing landslides and pushing trees and bushes into rivers, which end up floating out to sea.   But the long crossing would have also severely tested their ability to go without food and water.    In the best case scenario, it would be a journey of several weeks.

Thin-skinned amphibians couldn’t handle the salt water – and over millions of years, none every made it to Galapagos (until accidentally brought over by humans about 25 years ago).   Reptiles were well equipped for such a crossing – they can go without water and food for long periods.   This is why Galapagos remains the only place on the planet (besides Aldabra Atoll in the Seychelles) whose ecosystems are dominated by reptiles (just like in the age of dinosaurs).   Mammals can’t go without food or water for that long and the distance to the islands proved to be an insurmountable barrier for them – except for bats (no need to explain how they crossed) and rats.   One can imagine some rats being marooned on particularly large rafts of vegetation, and managing to survive on rain and what food source they would have found.   Galapagos rats today (Rice rats) are smaller and cuter than their mainland cousins.

All this to say that dogs were not part of the original cast in Galapagos.

They had it easy.  They arrived on boaths with humans and quickly established themselves.   As dogs do, they quickly multiplied and many became feral – running loose in town and beyond.   They started feeding on native animals who had evolved over millions of years in the absence of any dog-like predators.  Marine and land iguanas were particularly vulnerable.    Dogs also carry the canine distemper virus which can be transmitted to sea lions – an additional concern.   Clearly, dogs posed a problem.

Over the years, as the human population grew in Galapagos, so did the dog population – and so did the dog problem.   Efforts to control dogs were first made in the 1990’s by the Galapagos National Park Service – focusing on feral dogs in the park areas.    But until town dogs were controlled, it would be a never ending battle.    Today, the three main towns in Galapagos try to do something about it, but they rely quite a bit on help from NGOs, who in turn rely on the kindness of people for financial support.

The focus is on responsible dog ownership – ensuring that dogs are under control, taken care of and critically, sterilized.   But work needs to be done convincing locals that a sterilized dog is just as good as a non-sterilized one – an uphill battle.    When people talk about the need to develop a distinct “island culture”, one of the components of that is a general understanding on the relationship between pet ownership and sustainability, and an assumption of the responsibilities that go with pet ownership.   Some hope that an island culture will eventually lead to an acceptance that pets such as dogs (and bird eating cats) have no place at all in the islands and that these will become a thing of the past. 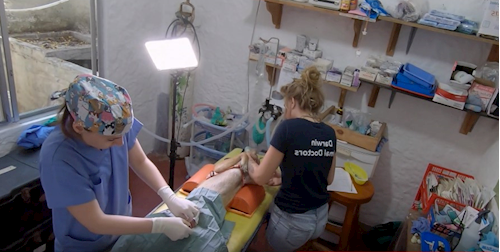 Perhaps that day will come, but in the meantime, there remains an immediate problem to contend with.  One of the NGOs operating vet clinics in Puerto Ayora (Darwin Animal Doctors) is featured in this very well done, amusing and entertaining 7 minute video.  Several young and dedicated international vet volunteers are interviewed, and plenty of dogs are featured.  It’s produced by our good friend Michael Bliemsrieder, my old office mate and recent candidate to the mayor’s office in town (alas, unsuccessful).

Should anyone wish to support Darwin Animal Doctors – please let us know and we’ll put you in touch with the right people.