Park director under pressure to resign

Jorge Carrion, Galapagos National Park direct since March 2018, is under pressure to tender his resignation.   Based on information gathered from friends and following recent Galapagos community FaceBook posts, it seems that there is a lot of pressure from an international cruise ship company to bend some rules so that two smaller ships it operates can be combined into a single larger ship.  In an effort to ensure that the ship fleet does not all get concentrated into a small number of big ships owned/operated by a few owners, regulations/policy has long prevented this kind of consolidation from taking place.

Today, a member of a Galapagos family that owns one of the smaller ship in Galapagos (none other than the Samba) posted an entreaty on his FaceBook page, asking Jorge Carrion not to resign.  At the Galapagos National Park headquarters in Puerto Ayora today, people have assembled in support of his continued role as park director (see pictur below). 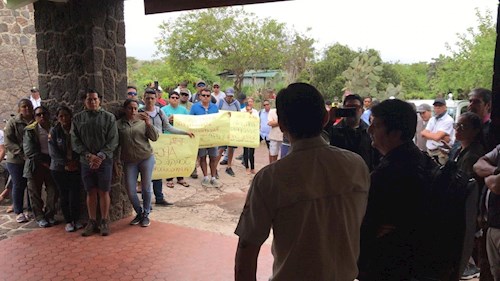 Park staff, guides, community members encourage Jorge Carrion (back to the camera, khaki shirt) to stay on the job

I provide a slightly edited Google Translate version of Juan’s comment, along with that of another Galapagueño who first started to raise the alarm.  With this, I'm hoping to give readers a glimpse of the kinds of things that go in Galapagos, behind the idyllic scenes of a typical expedition cruise.  There's a lot at stake in the cruise ship business - with large companies hoping to elbow themselves into the fray.

Jorge Carrión do not go. Please reconsider, don't quit. You are the banner of generational change in our institutions. You are a galapagueño prepared, capable and worried about doing things well for the benefit of nature and for the well-being of the people who live here.

You have demonstrated immense humility and dedication to service by joining the efforts of other public institutions to work in coordination, something that may sound simple and logical but that many who went through your job did not do so due to lack of will and ego.

Jorge don't go. Your leadership is indispensable to stop the abuses of the economic maelstrom of our archipelago / home. Do not leave because you leave the door open for institutional pressure and compromise the uncomfortable decisions that only you made.

Jorge don't go. Stay and help us continue to lead a future in which the residents of the islands work together so that our children and grandchildren are the ones who inherit the well-being of playing in this paradise.

This is something that the galapagueña community should know about the sudden resignation of Jorge Carrión to the position of Director.

The Galapagos National Park was run by a young professional from Galapagos who demonstrated at all times his ethics and his commitment to the institution and his land, but by political pressures he decided to step aside.

Unfortunately, certain authorities in large ministries called "Sectorial Authorities", for their personal and political interests, intend to urge or persuade professionals of our land at their convenience, that is, they try to manage them at will, conditioning a job in exchange for attending to their personal interests.

New authorities of the Ministry of Environment, take issue with the strict and correct Galapagos conservation regulation compliance.

The new Deputy Minister of Environment is linked to the legal part of some tour operators who intend to obtain approval of environmental permits.  Park technicians and the Director want to comply with rigorous procedures, but are receiving political pressure to ignore legal procedures and favor certain tour operators.

Galapagueños, do not let them impose on us another Director at the convenience of the Vice Minister, we support Jorge Carrión and the park, they surely want to place another Director that DOES allow these acts of corruption. Authorities take into account that the Park is being asked to approve these licenses in exchange for the approval of administrative procedures essential for the park.

The Galapagos National Park is the institution to which we have entrusted the conservation of our islands and therefore must be respected ...

We ask that the Park be an independent institution that can manage honestly and does not have to fulfill political favors to Ministers and Vice Ministers.

With Galapagos you do NOT play!

As expected, the park director, Jorge Carrion DID resign from his post on the 4th of September - but during the night of the 4th and 5th, following discussions with his superiors, he rescinded his resignation and is back in his job.   This is considered excellent news for the champions of good governance and conservation in Galapagos.