He was kidnapped by aliens 50 years ago, imprisoned and subjected to scientific experiments.  He ended up rescuing his compatriots from total obliteration and, as the story ends, he makes it back home, safe and sound.

No, this isn't the latest Hollywood timetraveling blockbuster sci-fi thriller - but the story of Diego, a giant tortoise from Española island. 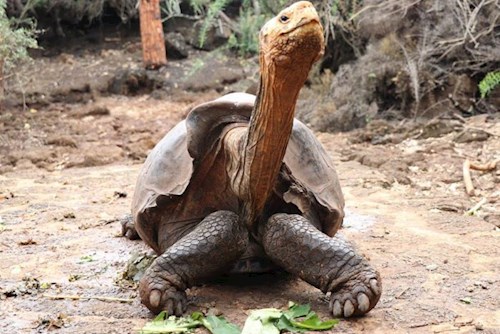 All was well for the Española tortoises... until humans arrived on the scene.  About 200 years ago, whalers and explorers started stopping in at Española to replenish food stocks - and giant tortoises was what they were after.  Tender of flesh, surviving for months in ships' holds, Española island tortoises were easy (the island is relatively flat) and sought-after prey.   When the first census was carried out by scientists, they counted only a handful of them remaining, including 2 males, of which Diego.

Hapless Diego was transported back to the Charles Darwin Research Station on Santa Cruz Island, along with another male and 12 females.  Together, they helped restore Española's giant tortoise population to over 2,000 individuals today.

For the two years that we lived at the Charles Darwin Research Station, Diego was our neighbour, happily doing his duty in the giant tortoise pens just a 2 minute walk from our front door.

The Galapagos National Park Service declared that the Española giant tortoise was now out of harm's way, and that the tortoise restoration work carried out by it and by the Darwin Station would come to an end.   His duty done, Diego will be returned to his native island in March.