One of the most delightful spectacles while on an expedition cruise in Galapagos is watching dolphins ride your ship’s bow wave.   The dolphins will actually seek it out.  If there’s a group of dolphins in the vicinity of you ship, you’ll often see them change course and make a beeline for the boat.   Clearly, the boat is not a source of stress for them.

Bow-riding dolphins hardly have to exert themselves to move forward.  As the ship advances, it creates a pressure wave at its bow – a bit like having a strong tail wind while you’re on a bicycle.   While in that wave, dolphins have little more to do than just navigate to ensure they’re going in the right direction.   There is little need to flap their tails for propulsion.    Dolphins fitted with heart rate monitors helped scientists conclude that while bow-riding, the dolphin heart rates can be up to 70% slower than when they’re swimming in open waters.

You’ll likely have half a dozen of more of them surfing the wave as close as 1 meter (3 feet) from the ship’s bow, usually very near the surface.   While they’re doing this, you can spot them turning sideways and, apparently, looking up at you as well.   You can also hear their whistles and chirps – it seems that while bow riding, they’re still communicating.  What might they be saying?

The fine details of their bodies can be observed, including tell-tale scratches along their dorsal area, typically resulting from playing nibbling between individuals.   It’s also a good opportunity to watch their behaviour and how they interact.  Dolphins are very social animals and are constantly touching / nudging each other.

I’ve not been on a cruise where I’ve not had the chance to see some bow-riding dolphins.  It’s always a pleasure.   You can sense that these animals are having fun, that they’re playing with the wave and with each other, and you do feel that they’re also looking at you, perhaps wondering about those funny looking creatures on the boat, and maybe feeling a bit sad that we’re not able to jump in and enjoy the fun with them. 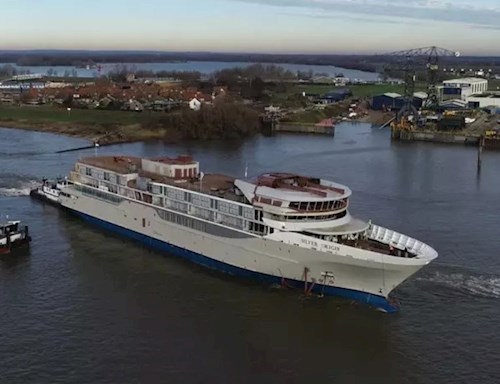 The new 100 passenger Silversea ship emerges from its construction yard in the Netherlands last week.  Though this ship is likely to be one of the most luxuriious in Galapagos, its naval architects somehow didn't factor in a way to faciliate the observation of bow-riding dolphins.   The bow projects well forward of the waterline, the deck is a good 8 meters above and the railing is angled in such a way as to make it very difficult to look over the edge and down to the bow. 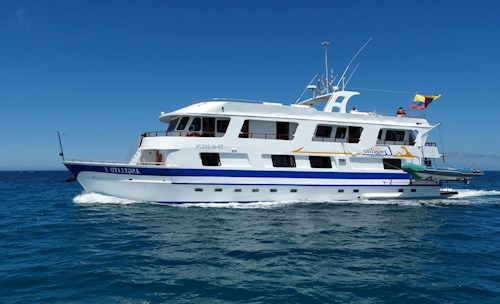 The 16 passenger tourist superior class Angelito is perfectly adapted to watching bow-riding dolphins.  The deck is only 1-2 meters above the water line, the railing is near-vertical and the bow is nearly directly below the the railing.

To see a short a video I made of my son (10 years old at the time) watching a bunch of dolphins having a great time on our ship’s bow wave, nearly arm’s length away, click here.