It has been an "exciting" few days.  Though we all saw COVID-19 looming on the horizon and anticipated that it would eventually begin to cause problems to tourism in the Americas, the next thing we knew, it had sneaked up behind us and was nipping at our heels.

Alarm bells began to ring in earnest just 10 days ago.   Another giant cruise ship off the coast of California reported COVID-19 cases, and governments began emitting advisories against going on cruises, the USA started banning flights from Europe and the Canadian government was urging all Canadians to strongly consider canceling any out of country travel plans.

The government of Ecuador then imposed a 14 day quarantine on all arrivals from certain countries as well as some U.S. states (California, New York, Washington).   We had to inform our guests from those places that under these new rules, they would not be able to join their respective cruises.

By last weekend (Saturday 14 March) though no formal announcements had been made, we were hearing rumours from our well-placed contacts in Ecuador that a complete travel ban would be imposed in a matter of days - barring any incoming foreigners from arriving into the country.  It was clear that commercial air traffic would soon be very disrupted even for guests already inside the country wanting to go home after their trip.

We decided that it was time to pull the plug and do what we could to get all of our guests out of the country and back home as soon as possible.  The ship was in the far reaches of the archipelago and we ordered it to make its way to the airport - Monday being the soonest it could be there for outgoing flights to the continent.  We had our other three guests on land in Galapagos - and assumed that for them, as they were already booked to fly out of Galapagos and Ecuador on Monday the 16th, all would be good.

In the meantime, we started to frantically work at finding exit flights for our group.  From Sunday to Tuesday last week, for nearly 18 hours a day our team was on the phone, WhatsApp, email, texting and skyping to the ship owner, the naturalist guide on the ship, our guests on the ship and our guests on the mainland.  On Monday, our land based guests in Galapagos called to let us know that their flights out had been cancelled.

On Sunday, it became official.  Ecuador would be closed to all foreigners by Monday the 16th at midnight, although foreigners would not be prevented from departing after that date we knew that flights out would be scarce. It was now clearly a race against time.  National flights from Baltra to Quito were secured for our cruise-based guests.  On the morning of Monday, March 16th, with chaos at the airport due to overbooked flights, both of cruise-based and land-based guests were told that their tickets would only take them as far as Guayaquil.  Five guests decided to take their chances and take this flight.  The balance (eight guests) held out as it was announced as there may be an alternate flight all the way to Quito available shortly.  They would have to wait.

for another only some managed to get on - and only to Guayaquil. We booked on-going flights to Quito for this group of 5, however, because their flight had departed from Baltra late, they missed the connection that would have permitted them to make their international connection.   There was chaos at the airport.  The rest of the group did get out to the continent on an alternate flight - but again, only as far as Guayaquil.  Because these two flights departed late, all 13 of our guests in Galapagos missed the international connection from Quito to Miami we had secured for them.  Our 4 Quito-based guests were the only ones of the 17 guests we had in country to make this flight.

Half of the group made a strategic decision and continued on to Quito as we had indicated that their might be a flight out there that same night... no luck.

We searched for other flight options and by Tuesday morning, we found tickets for another flight from Guayaquil to Miami, leaving Tuesday night.  Those that had flown into Quito the night before had to fly right back to Guayaquil Tuesday.  Fingers were crossed everywhere - flights were being cancelled and rescheduled - we had no idea if this flight to Miami would go.   But it did.   What a relief to all. 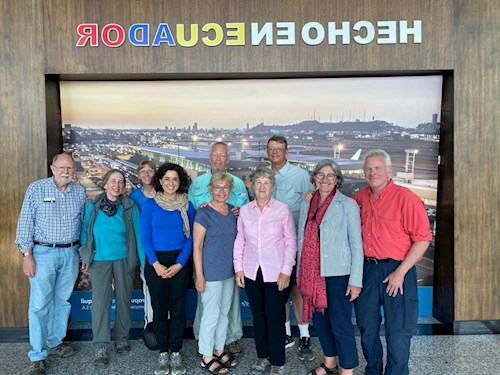 Out in the nick of time: The Samba 10, just before boarding their flight out of Guayaquil to Miami.  They look surprisingly relaxed - but we assume that they had just had a very harrowing 48 hours prior to this picture being taken.

Miami was not the final destination for any of our guests.  They all had to find their way home to different part of the USA, Canada and Bermuda.   Our Bermuda was the last one to make it - emailing us just Thursday evening that she had made it, safe and sound.

Our land-based Galapagos guests managed to catch their flight home as well, after the shock of the initial cancellation, while our 4 guests on the continent, not having to worry about making it in from Galapagos, got out on Monday night - very disappointed to have missed their trip of a lifetime, but at least they are not marooned in Ecuador, like so many others.

Every day, as we monitor the press on Galapagos related matters, we are seeing stories of tourists still in Galapagos (even domestic flights have now very restricted) or on the mainland.  It may be many days, if not longer, before they manage to get home.   When we see these stories, we are reassured that we made the right call last week.

PS:  A big thanks to our local team:  Part-time fixer Adriana who also happens to work for an international airline (that came in very handy) and our full-time Quito-base colleague, Mercedes whose 20+ years in the business showed its value.   Heather Blenkiron coordinated efforts from Canada - ceaseless and tirelessly.