A note to fellow Galapaguenos

Juan Salcedo, who, with brother and sister and mother, owns and operates the 14 passenger expedition cruise ship SAMBA.   He was on a first ever family holiday to Europe with his wife and 2 young daughters when they were forced to evacuate just before the COVID-19 curtain was lowered.  They made it back home last week, and are now self-quarantining in Quito, after which time they hope to go back to Galapagos.

Social media in Galapagos is always a chaotic place, with all kinds of outrageous statements, cheap politics, conspiracy theories and hyperbole.  In this climate of COVID-19 induced uncertainty and under lock-down conditions, things are even worse.

Having witnessed the invective and disinformation, Juan, always a cool head, attempts to pour a little oil on the troubled waters in this post, published today. 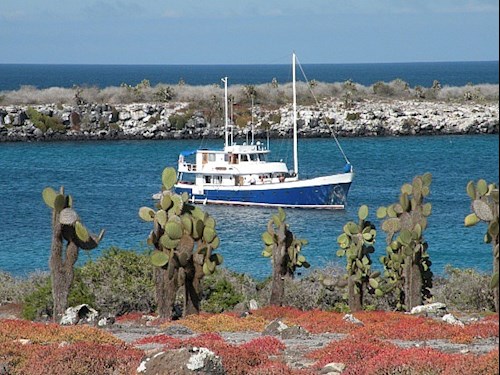 This is a long note, but now we can't complain that we don't have time to read. Many of us spend a lot of time on social media - so I urge you to read this.

The most difficult days are still far away. The good news has been hiding behind the chaos of misinformation and uncertainty. Those desires and positive advances have been hampered by the chaotic irresponsibility of social networks, which are fueled with the force and speed of recklessness and ignorance of many. These people write to feel important, they write to criticize, undermine, to generate rejection and discourage common sense. Please STOP.

I have remained silent so as not to contribute to a discussion that is increasing in tone and has the intention of generating a digital pandemic, causing despair to gain ground faster than hope. Now that we have confirmed cases of COVID-19 in Galapagos, it is time to intervene, to call for empathy, generosity and social responsibility. Unity and solidarity PLEASE.

We are a family of 4 and we have almost all of our relatives on the islands. Our home and our work is in Galapagos. We have mothers and fathers in vulnerable situations. This reality also worries us and we are sure that harder days will come even when our health and economic situation are good at the moment. For now we are taking one day at a time, with a lot of patience and a desire to collaborate.  We’re currently in self-quarantine in Quito so that we can return to Galapagos soon.

When COVID-19 was a distant thing, when it was already known but, it was China's problem, we traveled abroad for a month. We left Quito on February 19 and flew to New York where there was no case yet (more than 35,000 now in the USA).  Our only concern was over the eventual spread of the virus. My daughters are 9 and 11 years old and in those days, it was still unclear who was most vulnerable. We were responsible and meticulous in taking precautions even since we left the Islands. Gel, alcohol and masks were part of the luggage.

We arrived in Europe just as the virus began its dizzying advance. It almost seemed to follow us from destination to destination. Madrid and Barcelona presented the first cases and both authorities and people were very casual and indifferent, tourism numbers were high due to an unusually warm winter. We spent a week in Spain and did not see evidence of any preventive measures,  even when the situation was already catastrophic in Italy.

When we left for Paris, Spain was still asleep. In early March the French and their government still did not react. On their own initiative, the Louvre employees decided to close and were harshly criticized by tourists.  The government reopened the museum, dismissing the virus. France has more than 16,000 confirmed cases and nearly 650 deaths at the moment.

We continued to travel very cautiously, disinfecting everything. You will understand that with two young girls the level of stress and vigilance as parents was enormous. Although we always enjoy the trip and the activities we were aware of the danger and our hygiene protocols were at the highest level. Our last stop was Switzerland and upon arrival the holiday mood was normal. For this it is important to say that we always travel by train, metro and bus. At no time was anything disinfected, nor was there any hygiene or preventive protocol to reduce infections. Europe lived a climate of tranquility and denial.

Only on March 13, they remember that Friday the 13th, there was a reaction to the WHO PANDEMIC statement. Switzerland still did not take rigorous actions even though it already had more than 500 cases (today they exceed 7,000 and are among the 10 countries with the highest number of infections).

Ecuador took more effective measures and did so more quickly than Europe. For that reason we were hardly able to return to our own country. I am not a supporter of any politician, current or former, but I understand that they are authoritative and must take measures to reduce the spread of the virus. They are not perfect, yet they have shown more prudence, common sense and commitment than the authorities of developed countries. The rest is citizen responsibility, the rest we have to do. Upon returning to Ecuador we follow the protocols requested by the Government. We are still in Mandatory Preventive Isolation here in Quito and, although we have not presented symptoms, we have been very meticulous and compliant so as not to be asymptomatic transmitters of the virus.  It will be another 5 days before we can be sure that we’re not carrying the virus and perhaps it will be longer before we can actually return home to the islands.

I would like to shout: Stop making a mess of things! But that won’t help much (a little humor after having to read this spiel). I prefer to say: nobody is to blame, let's understand that this is a WORLD problem. That goodwill and the desire to collaborate will be the essential ingredients to get out of this enormous health and economic CRISIS.

Today more than ever we contribute in a positive way, silencing the EGO and activating the best sides of ourselves.