The following is adapted from an article that appeared in the El Universo newspaper on 16 July 2020.

The Ecuadorian Navy was alerted this morning to the presence of a fishing fleet made up of 260 foreign vessels near the limit of Ecuador’s Exclusive Insular Economic Zone (ZEEI). 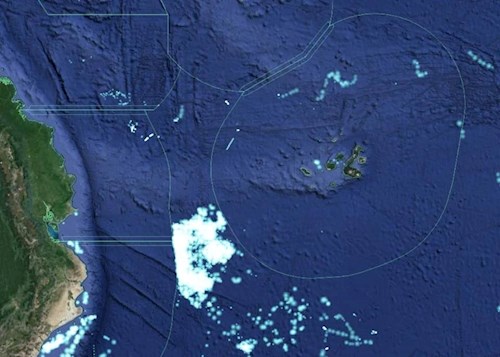 At the moment, the Naval Operations Command maintains continuous surveillance with Naval Aviation aircraft and also with the missile corvette “Loja”, which relieved the “Manabí” in these tasks in the continental sea.

The fleet would be made up of fishing, supply and warehouse vessels, the Navy said.

At the same time, the personnel of the Maritime Analysis Division of the Operational Command sent information to the units located on the edge of the continental sea so that they corroborate that these foreign vessels do not enter the ZEEI and carry out some type of illegal fishing activities that threaten the Galapagos Marine Reserve (Ed. A World Heritage Site).

In 2017, naval teams intercepted the ship Fu Yuan Yu Leng 999 while sailing illegally within the Galapagos Marine Reserve. The crew members were sentenced. Some 300 tonnes of fish mostly sharks, were found in the holds of this Chinese vessel.

Editor:  The Galapagos Marine Reserve has among the strictest fishing regulations among all the marine reserves along the entire western shores of both North and South America.   Only a limited number of local Galapagos fishermen can fish there, and they are restricted to small ships and low impact fishing practices.   The waters within the reserve, and those extending to the coastal area are very rich in nutrients, as they are bathed by a variety of currents, including the cold Humboldt coming from the south, and the upwelling of the Cromwell current, coming from the west.    These rich waters attract industrial fishing fleets – and keeping them out of the Marine Reserve is a constant challenge.

While strictly legal, the fact that the seas can be vacuumed out of their fish with little or no oversight highlights the on-going need to establish some type of international waters fishing regulation / monitoring system.   Moreover, it has been reported that these fleets will send small boats out at night into the reserve, bringing back their haul to the factory ships by daybreak.

The Galapagos Marine Reserves cover the same area as the entire landmass of Greece.  It’s hugely expensive to monitor effectively, particularly when its boundaries are being tested by so many fishing ships.