Scuffling in front of the Governing Council offices as conditions worsen

Faced with an ongoing economic crisis in the islands, some citizens groups have come together to propose solutions, many of which are contentious.  These include opening up the islands to long-line fishing, a practice considered very harmful to non-targeted marine species.   Also, there is a proposal to send away all people living in Galapagos who don’t have the full resident status, but are only there on temporary visas, thus allowing for more jobs to go to Galapagos residents. An effect of this request would result in the loss of many of the health care workers in Galapagos.  AGIPA, the Association of Naturalist Guides of Galapagos, published an open letter yesterday raising concerns over such measures.

In response to these mounting pressures, the Governor of Galapagos – who also has the status of Minister in the national government, had called a meeting with community groups to discuss these proposals on 7 July.   However, due to the recent resignation of the vice-president of Ecuador, the president called a last-minute emergency meeting on that day, and for that reason, the 7 July meeting had been postponed to the 10th of July.

Community groups gathered and marched on the offices of the Regional Council in frustration.  A peaceful march degraded into chaos, with the Governing Council’s Technical Chief, Monica Ramos, rough -handled by the crowd. 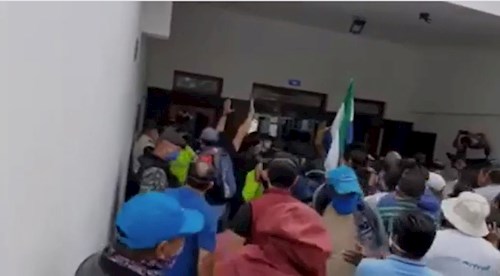 Frustrated protesters storming the offices of the Regional Governing Council

In an open letter addressed to community groups and distributed through social media, the Governor, Norman Wray explained why the meeting had been postponed, further indicating that the health and security of all people had been put at risk by the demonstrators gathering in such close quarters since the COVID-19 virus remains active on the island.  The Governor called for maintaining responsibility, respect and tolerance at this moment given that tensions are inflamed by the "electoral interests of some citizens" (the pre-electoral period in Ecuador can be agitated).   The open letter further notes that all the work that has been done to make Galapagos a safe travel destination should not be put at risk.

The community groups responded that while the 7 July meeting had been clearly communicated, they were not informed of its postponement, prompting them to organize the march.

Things are heating up in the islands.  The Galapagos economy is very dependent on tourist dollars.  Tourism has been completely shut down since mid-March (some of our guests were among the last to have had the privilege of visiting the islands).  The government of Ecuador is heavily indebted and has very few options when it comes to helping its citizens in these difficult times.  Under these circumstances, it's easy to understand the mounting frustration, and perhaps panic, felt by Galapagos residents - it's not clear at all when tourism will start up again.   While the continental economy has also suffered, it is much more diversified and there are more alternatives to income derived from tourism.