Evidence of Cannibal Snakes in Galapagos

Full study can be found HERE. Photo credit: Richard Wollocombe, for the GNPD. 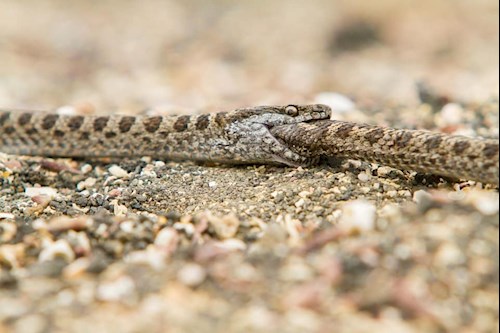 Scientists from Massey University in New Zealand and park rangers from the Galapagos National Park conducted an investigation focused on snakes on Fernandina Island, in which the cannibalistic behavior of reptiles is shown.

The scientific article published in "The Herpetological Bulletin", [on] October 1, included in its study captures of individuals, analysis, and photographic record.

Danny Rueda, director of the Galapagos National Park and co-author of the study, explains that in the field work 93 snakes were captured and measured at Cape Douglas, on Fernandina Island. 61 stool samples were also collected and analyzed.

Luis Ortiz-Catedral, head of the investigation that began in 2018, details that they found teeth, scales and fragments of snakeskin in 11 samples; one of which had 31 teeth and remains of skin.

Thus, among the samples of excreta (or feces), they found teeth and skin fragments that confirm the behavior of cannibalism among the snakes of the western Galapagos (Pseudalsophis occidentalis).

Richard Wollocombe, co-author and nature documentarian, recorded and photographed the hunting behavior of the archipelago's snakes, and witnessed several attempts of cannibalism.

The finding is part of a large-scale study on the natural history and diversity of snakes in the Insular Region of Ecuador, of which there are nine species. In addition, it provides information on the trophic relationships of these reptiles, which makes it possible to better plan the management activities of the protected area and of these species.

The Data: "The Herpetological Bulletin", is a quarterly publication, which includes natural history, book reviews and other articles of general herpetological interest.