The Ecuadorian Geophysical Institute announced on Friday that significant deformation of the Fernandina volcano in Galapagos has been occurring over the past 18 months.  It went on to explain that this deformation is frequently associated with impending eruptions, as deep magma pushes its way ever closer to the surface. 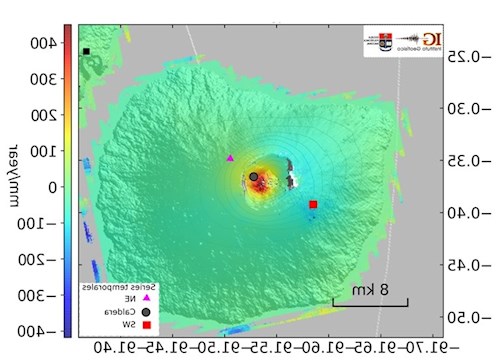 Fernandina is one of the most active volcanoes on the planet, erupting every few years.  The last most impressive eruption occurred on in June 2018.  Fissures along the volcano’s slopes let out jets of lava for several days, producing lava rivers that flowed into the sea.   Expedition cruise ships in the area were able to approach and witness one of nature’s most impressive spectacles (click here to watch the short video, including lightning bolts produced by the ash and steam). 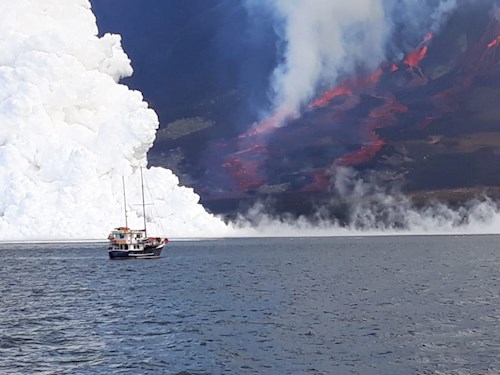 Fernandina volcano is located on Fernandina island, the westernmost island in the archipelago.  It’s the youngest of the Galapagos islands.  Completely uninhabited, it’s generally considered the largest, most pristine island in the world, accessible only via expedition cruise ship. There is only one visitor sites on the island, where tourists can disembark and walk along a marked trail to witness its rugged landscape, and walk among marine iguanas, sea lions, flightless cormorants, Darwin’s finches and preening penguins.

The island is bathed by Cromwell deep ocean current.  The current rises to the surface around the island, bringing with it nutrient rich waters which sustain diverse and abundant marine species.  Dolphins and whales are common in the waters here, as are sea birds and other ocean dependent species.

In its announcement, the Ecuadorian Geophysical Institute concludes by saying that the deformations observed could be a indicative of eruptive activity in the medium-long term (weeks to years).  Usually, eruptions in Galapagos have a lifespan of several days to a few weeks.   Witnessing them from the deck of your small ship is an unforgettable experience – but one that cannot be planned for ahead of time.

Subscribe to our occasional newsletter:  Every few months, CNH Tours sends out a newsletter to our subscribers.  The newsletter contains the latest information on upcoming trips, on new destinations and on other matters that could be of interest.  If you'd like to join our list of subscribers, you can give us your email address and name by clicking here.