On a sunny day In March, 2001, I was working at my desk at the Charles Darwin Research Station.  My office had a wonderful view of Academy Bay, where several small expedition cruise ships anchored.   A man called Jim Thorsell dropped by.  “Hi!  I’m here on an evaluation mission.  UNESCO sent me to check out the Ecuadorian government’s proposal to add the Galapagos Marine Reserve to the World Heritage list, and I’d like to ask you a few questions”.    In those days, I was only vaguely aware of the World Heritage list – some type of United Nations approved list of the modern-day wonders of the world.  “Fine” I said, “let’s grab a coffee and chat”. 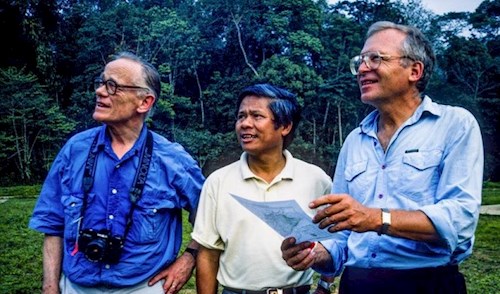 Above:  Jim Thorsell (left) on a World Heritage mission to a tropical forest somewhere.

Eight months later, on the 14th of December 2001, the intergovernmental UNESCO World Heritage Committee approved the addition of the Galapagos Marine Reserve (GMR) to its list, adding it to the already existing Galapagos World Heritage site (which had until then only recognized the land area as a World Heritage site).  The report produced by Thorsell and his colleagues can be consulted here.   It’s one of the most comprehensive yet succinct description of the reserve available.

Until earlier this week, the GMR covered and area of 133,000 square kilometers (51,352 square miles) - about the size of Greece, or of the state of Michigan.  But at the 26th meeting of the climate change Conference of the Parties (COP 26) going on in Glasgow these days, the president of Ecuador announced a whopping 60,000 sq km (23,166 sq mile) expansion of the reserve – nearly a 50% increase.

The original reserve boundaries were drawn as classic arbitrary “lines on a map”, including all the waters within a 40 mile / 64 km distance from the nearest points of land.  While this approach has the advantage of being expeditious, particularly when there is little hard-core information on the underwater ecosystem dynamics of the area, the addition to the reserve was designed based on accumulated scientific knowledge on marine ecosystems.  Two decades of study went into understanding how marine species used the Galapagos marine reserve throughout their life cycles. 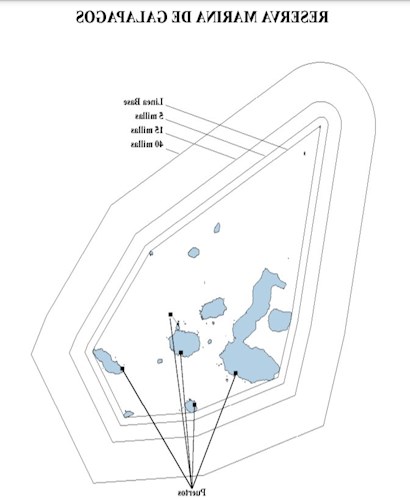 Above: The Galapagos Marine Reserve as originally designed. A simple "40 miles out from the nearest point of land" approach.

I left my work at the Charles Darwin Research Station in 2002 and took up a job at the UNESCO World Heritage Centre in Paris in 2003.  While there, I managed a multi-million dollar portfolio of projects (financed in part by a recent donation of $1B to the UN by Ted Turner).  One of these supported research into the Eastern Pacific Tropical Seascape (ETPS) – carried out in the field by international and local conservation organizations.   That work helped us understand how the undersea ridge that extended between Galapagos towards the Costa Rica mainland to the northeast was used by sharks as part of their migratory routes.  Thanks to that knowledge, the government of Ecuador was able to design boundaries to the GMR’s expansion which would most effectively protect species requiring protection (sharks are intensively hunted globally to feed the “shark fin soup” market, predominantly in China). 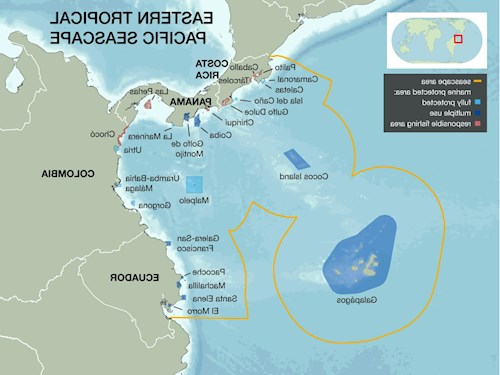 As a result, a “panhandle” was added to the GMR, located directly above the undersea ridge used by migratory species such as sharks.  The addition includes a core zone, where no fishing at all is permitted, and a buffer zone, where all fishing except for long lines is permitted.  Long lines are notorious for their indiscriminate by-catch.   Long lines with hundreds, or thousands of hooks are put into the water, aiming to catch deep sea fish such as tuna and bill fish.  But many other species, such as sharks and even pelicans, sea turtles or albatross, and sea lions often end up being caught and killed.   An additional zone of “no longlining” was added to the western and northern circumference of the existing GRM reserve as well.  The political pressure is now on Costa Rica, Panama and Colombia to do their part and expand their own marine protected areas. 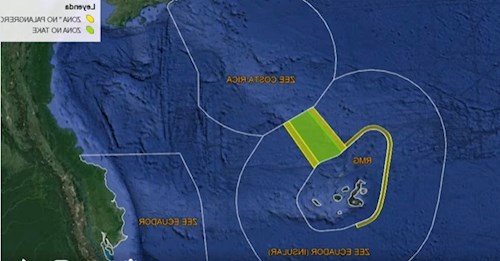 Above:  The recent additions to the Galapagos Marine Reserve, following undersea mounts.  Green: No fishing.  Yellow: No long-line fishing.

While the announcement of the GMR’s expansion has been welcomed with great applause by all conservation and sustainable fisheries management people, it did fall short of the expectations set by proponents of a much more audacious GMR expansion plan, promoted by Galapagos-based community groups and supported by marine conservation interests around the world.  That expansion called for the entire waters within Ecuador’s Exclusive Economic Zone around the Galapagos archipelago to benefit from an enhanced conservation regime.  The map below illustrates the vision:  Dark green zone 1 = no fishing; Beige zones 2a and 2b = responsible fishing with monitoring; Olive green zone 3 = El Niño buffer zone - no fishing during El Niño years.  That would extend the GMR’s boundaries from 40 miles (64 km), to 200 miles (320 km) beyond the nearest point of land.   Watch this space for future GMR expansion announcements… 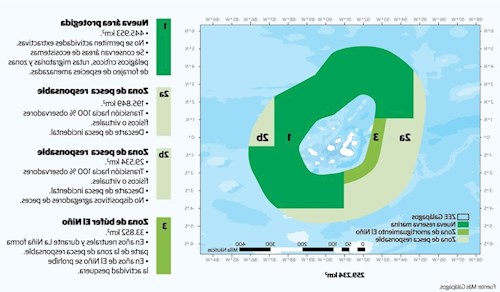 Above:  Galapagos Marine Reserve as proposed by marine conservation groups