They are back.   Last spotted nearly 200 years ago, the Galapagos Land Iguana is staging a comeback.   Last week, the Galapagos National Park Service released a further 421 individuals on Santiago Island, further boosting numbers following the first re-introduction in 2019.

Coincidentally, this is where Charles Darwin spent most of his time while in Galapagos in 1835.  He was the last person to report seeing them. According to Darwin, not one for diplomatic niceties: “From their low facial angle they have a singularly stupid appearance”. 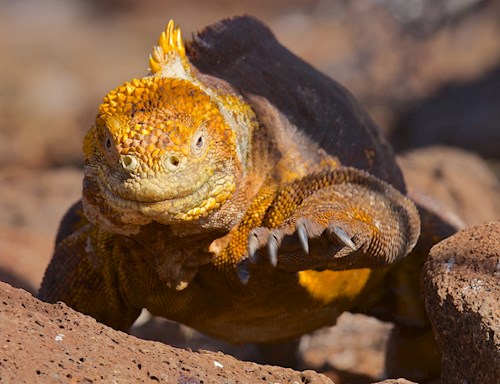 Pigs are no friends of ours!

The original land iguana population, having inhabited the island for likely hundreds of thousands, if not well over a million years, were done in by pigs.  Pigs are very good a sniffing out iguana nests in search for tasty and nutritious eggs – and were thankfully absent in Galapagos until the late 1700’s, when whalers, having exhausted the easy catches in the Atlantic, started hunting in Pacific waters.   The whalers would “seed” islands with animals that would provide them with fresh meat on future expeditions.  Goats were a favourite – but pigs were also on the menu.

While it was clear that removing the goats and pigs from Santiago Island would be necessary for any successful re-introduction of the land iguana to Santiago Island, both the Galapagos National Park Services and its scientific advisory partner the Charles Darwin Research Station considered it an unachievable fantasy.  The large island (35km long, 25km wide – or about 21 miles x 15 miles) consisted of very rugged volcanic terrain with portions of thick, spiny brambles.

Still, something had to be done.  In an effort to reduce their predation on the Giant Tortoises (older individuals still roamed the island, but they had no success in raising new generations thanks to the pigs’ appetite for their eggs as well), the Park started sending out regular hunting parties in 1972.   These groups of 12 or so nimble hunters would head off to Santiago island once or twice a year for 10-12 days, head off into the landscape and shoot pigs.   They returned, having reported shooting as little as a dozen pigs to as many as 800.  Over a 24 year period, the total number of pigs reported shot came to 18,903.

Thanks to GPS technology and to new techniques to removing pigs, in parallel with several years of steady funding, the Park and the Darwin Station decided that total eradication could be possible.  They started a new campaign in 1998. After a lot of hard, work, the last sign of a pig on Santiago Island was observed in November 2000.  Subsequent monitoring missions found no further signs of pigs and the island was declared “pig free” in 2002.   That conservation success story opened the door to a land iguana re-introduction effort, the fruits of which we are witnessing today.   For more info on the pig eradication campaign, see my technical report written while I was working at the Darwin Station here. 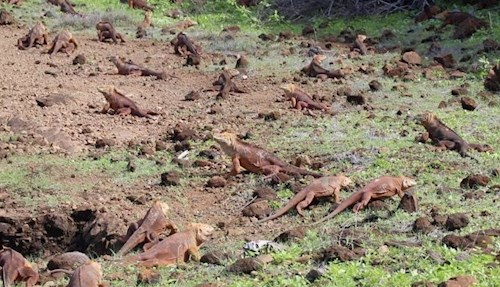