CNH Tours is happy to share today's press release from the Galapagos National Park Service (we have edited for brevity)....

But there is more behind this story than meets the eye.  While the National Park and its donor partner, the Galapagos Conservancy have carried out this work, the Charles Darwin Research Station (CDRS) is not satisfied that there is incontrovertible evidence of giant tortoise populations on Santa Fe island in the past.   The CDRS has expressed reservations - particularly in regards to the native population of land iguanas on the island.  They indicate that giant tortoises may outcompete the land iguanas for food and nesting sites on this very dry island.  The CDRS feels that the introduction of giant tortoises there was premature.

Such are the polemics that exist in the conservation world.  You will note that the Park indirectly addresses the CDRS concerns in the last paragraph of its press release.

A group of 191 juvenile giant tortoises of the species (Chelonoidis hoodensis) were transferred from the breeding center in Santa Cruz and joined the population that has been introduced to Santa Fe Island since 2015, as part of the ecological restoration of this small island.  A total of 732 have been introduced to date. 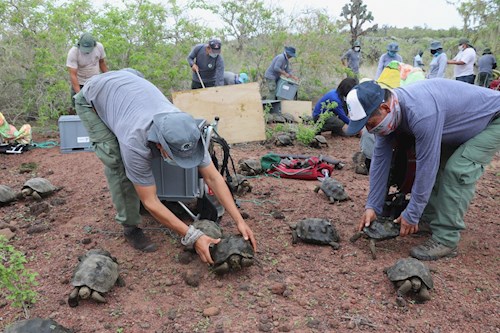 Washington Tapia, director of the initiative, explained that “the introduction of 31 sub-adult turtles carried out at the beginning of 2020 and the high survival rate of juveniles of 99.8%, allowed to accelerate the process of establishing a reproductive population in the island, which was essential to effectively contribute to the process of restoring the ecological integrity and biodiversity of Santa Fe ”.

The transfer was carried out by 22 National Park rangers and scientists from the Galapagos Conservancy, who traveled approximately five kilometers from the landing site to the release zone in the center of this 24.7-square-kilometer island.

National Park director Danny Rueda explained that “the process of ecological restoration of the island began in the 70s with the eradication of goats, but in 2015 it took a new impulse with the introduction of turtles, a decision that was taken after a comprehensive evaluation of the island showed that its main herbivore was missing, because the population of land iguanas, despite being large, did not fulfill the same role as turtles in the ecosystem, especially in terms of their contribution to seed dispersal ”.

The project, since its inception, has included a rigorous development of annual monitoring, the results of which have shown that turtles have dispersed approximately 30% of the island's surface and that there is no competition for resources between turtles and iguanas that are actively contributing to seed dispersal, especially of Opuntia cacti. Which in other words means that they are fulfilling their role as ecosystem engineers, an aspect that will continue to be documented through the monitoring activities that will continue in the long term.