Yesterday, while carrying out routine x-ray monitoring of luggage being loaded onto a commercial flight from Baltra (Galapagos) to Guayaquil in the mainland, the airport authorities noted very unusual shapes on their monitor.   They took the suitcase aside to inspect it.   Inside, carefully wrapped in plastic wrap (presumably to reduce the scent and avoid detection by sniffer dogs), the technicians found 185 baby giant tortoises – 10 of which had already perished.

This was how Nixon Alejandro, a police officer, was caught trying to traffic Galapagos wildlife.

The illegal wildlife trade is huge – in the many billions of dollars annually.   From rhino horns to pangolin scales, or colourful bird feathers, and even live tropical birds, fish and more.  It’s so big and the illegal proceeds finance so many nefarious groups that the United Nations set up the Convention on the International Trade on Endangered Species (CITES) in 1975 to provide global coordination in an effort to control it.  One well-know conservation organization, TRAFFIC, focuses exclusively on ensuring that wildlife trade is not a threat to the conservation of nature.  If you are keen on learning more, see their website here.

This is not the first time that CNH Tours has covered cases of illegal wildlife trade in Galapagos.  For a summary, see this news story.   In it, we cover other cases of giant tortoise and iguana smuggling, along with the shark fin trade.

In a statement, the Galapagos National Park indicated that the baby tortoises did not come from its breeding centers – where each tortoise is meticulously traced.   If that is the case, then Mr Alejandro obtained these baby tortoises from the wild somewhere.  In a way, it’s a good sign – a sign that wild populations are breeding well.  However, one can presume that Mr. Alejandro was not operating alone – it would be quite an effort to collect and store so many tortoise on one’s one, without at least others taking notice.  CNH Tours certainly hopes the authorities will carry out an effective investigation and apprehend his collaborators, both in Galapagos and on the mainland. 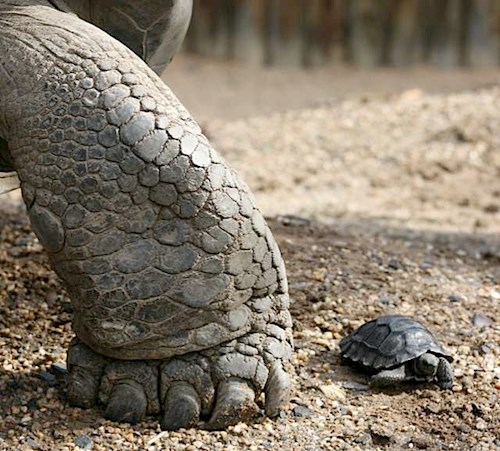 A lot of growing up to do still!