Launch of the 'Galapagos Hub'

The “Galapagos Hub” was launched this week and we believe it shows a true sign of (much needed) connectivity in Galapagos – both connecting on an interpersonal level as well as technologically. The launch was done via Facebook live, with majority of the presentation done by the President of the Governing Council of Galapagos, Norman Wray.

The Hub is described as a (virtual) space where information and knowledge can be exchanged between various national and international organizations, along with the communities of Galapagos, both from a wide spectrum of fields and areas of expertise. Its creators stress the importance of using this tool to ensure that, through science and technology, Galapagos will have an optimal balance between humans and the natural elements of the Islands. They will be using the 2030 Galapagos Plan as a guide and Wray mentions several times during his presentation that the work around this Hub will be free of ‘the usual corruption’ – very impressive to hear this type of blunt language used.

“Seguimos potenciando lo que se ha hecho y queremos dar pasos fijos para el futuro.” (roughly translated to, ‘We continue to promote all which we have done and we want to create definite steps for the future.’)  – Norman Wray, Governor of Galapagos

While this type of international academic exchange has been done in Galapagos for decades (mainly through the Charles Darwin Foundation and its many collaborating institutions), the 'game changer' for the Galapagos Hub will be that it will operate in a whole new era of fast and reliable internet in the Islands.

During the presentation it was clear that the youth and young adults of Galapagos are primary beneficiaries of this Hub and used strategically throughout its creation; several young Galapagueño university students took part through pre-recorded videos.  Wray comments several times about how the young will use science to solve the world’s problems.

This new tool brings together two Ecuadorian universities – both of which have their own type of satellite campus in Galapagos. Other collaborators in the Hub include: two UK academic institutions – King’s College Cambridge and the University of Edinburgh; two Ecuadorian government organizations; and two non-profit, non-governmental organizations – one of which is our old stomping ground, the Charles Darwin Research Station. 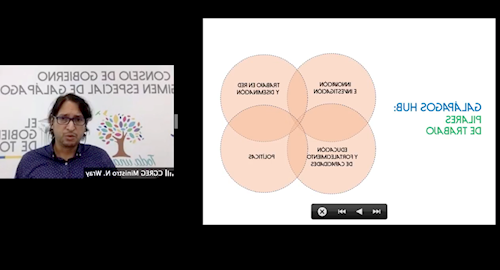 Norman Wray presenting the four pillars of the Galapagos Hub, during the live event. (Translation: Innovation and Investigation; Networking and Awareness-Raising; Education and Strengthening Sciences; Politics)

This effort has been several years in the making, but the catalyst (as well as defining element required for its function) will be a fibre optic cable that is scheduled to be operational in Galapagos in January 2022. This cable has been discussed for many (many) years now and it will bring a truly revolutionary connectivity to the Islands. (While we may later discuss the potential issues of laying and running an underwater fibre optic cable through the protected Galapagos Marine Reserve, I believe that conservation work in the Islands has been greatly inhibited by the slow and limited internet.)

Almost as if pre-arranged, the connection from the feed of Mr Wray cut out around the 16 minute mark, as he was presenting live. Again highlighting the significant need for substantial improvements in internet connectivity in Galapagos. Once re-connected, Wray laughs and comments on how this just further shows how crucial this fibre optic cable is for Galapagos.

The launch was done live on the Governing Council of Galapagos’ Facebook page (@cggalapagos), but a recording is available should you be interested (translations weren’t available during the live event).

We look forward to seeing more advancements with this new initiative and certainly we will be keeping a VERY close eye on any updates regarding the fibre optic cable.

Written by Kelsey Bradley Posted on 14 May 2021
news