Book Review: The Beak of the Finch

Today, May 22, is celebrated as International Biodiversity Day. While Galapagos itself isn't a particularly biodiverse area (nevertheless, very high in endemism), Ecuador has one of the highest concentrations of biodiversity in the world. Shockingly, its small geographical area contains over 23,000 species -- this accounts for approximately 6% of known species worldwide. According to the TheEcologist.org, Ecuador has more species of orchids and hummingbirds than Brazil.

As a way to mark the special day and the importance of scientists and field researchers in keeping our Planet as biodiverse as possible, we have reviewed The Beak of the Finch, by Jonathan Weiner. 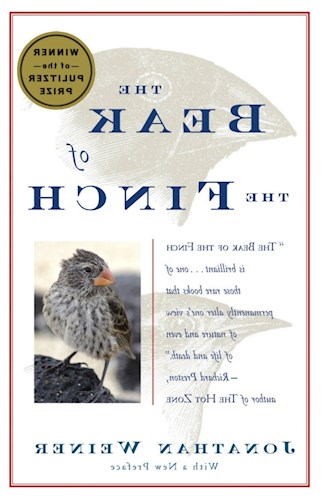 Simply put, The Beak of the Finch is a fantastic scientific summary that poetically transports the reader through space and time. It chronicles the work of both Charles Darwin and The Grants (capital "T" placed intentionally!), particularly focusing in on their concepts and observations of natural selection.

Rosemary and Peter Grant have been studying the finches of Galapagos, in particular those on Daphne Major, for now almost 50 years. (At the time of the book’s first edition, it was roughly 20 years). Anyone that has flown into or out of Galapagos from the airport on Baltra Island has seen both Daphne Major and Minor. They are located just west of the airport and can even be seen from the ferry that takes you across the Itabaca Channel. While you cannot visit Daphne Major, its sheer cliff edge and what appears to be inhospitable environment are apparent from a distance. 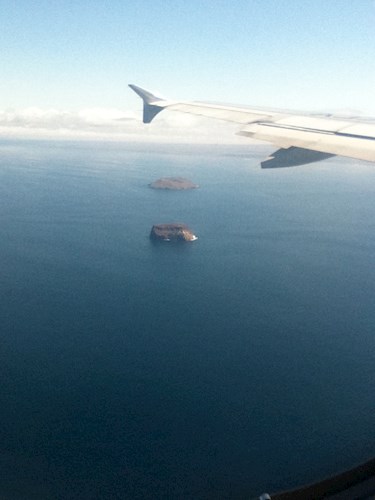 A view of both Daphne Major and Daphne Minor, from the air.

The Grants, along with their “Finch Investigation Unit” (ie their field team, made up of various scientist that took shifts in the field to gather data), spent decades capturing ground finches on Daphne Major, banding them, taking measurements and blood samples, and then observing their mating (amongst several other features). Specifically, they were focused on the Large Ground Finch (Geospiza magnirostris) and the Medium Ground finch (Geospiza fortis). The reader learns of the effects of the various El Niño events on the magnirostis and fortis populations of Daphne Major and (without wanting to ruin anything with spoilers) the Grants make a monumental and ground-breaking discovery.

Throughout the book, Weiner jumps effortlessly from Darwin’s world to that of the Grants. He is able to juxtapose the two experiences both in Galapagos and back at their respective homes perfectly, highlighting both their methods of research in various, yet specific, ways. For example, he describes how meticulous Darwin was about keeping and filing his notes. Each notebook was stored in tall bookcases surrounding his fireplace, filed in such a way that Darwin would be able to reference his previous notes with relative ease. Weiner then brings the reader back to Princeton, where the Grants have boxes upon boxes of stored floppy disks, lined on a tall shelf around the room like crown molding. For those of us old enough to have experienced the clanking of a computer as it reads a floppy disk, Weiner’s writing on observing Rosemary Grant do exactly that will make you nostalgic. Whether you know what a floppy disk is or not, reading about what extraordinary amount and quality of data that was stored on all of those floppy disks by the Grants and their team will leave your jaw on the floor.

While describing the moment Weiner watches Rosemary as she loads the data inputted by the Finch team from field work conducted between 1976 to 1991: "There is a long pause while the computer clicks and clacks, but the screen stay blank. 'This is a big file', Rosemary says as she waits: '5,575 kilobytes, I think it is.' A file that size could hold about a million words, or the complete manuscript of Darwin's 'Big Book', Natural Selection, plus several editions of the Origin and the Descent of Man."

Weiner’s descriptive writing transported me from cold and snowy Ottawa, to the shore of Daphne Major where ocean waves crash into the lava edge and make for a difficult disembarking from a small dinghy. Weiner’s writing style is captivatingly descriptive and precise. You feel for the researchers that were “on watch” during the drought of the 70s – it made me thirsty just to read those passages. Through his writing you can sense their yearning for rain and the finch breeding that rain would allow for – the frustration is palpable when rain doesn't arrive. At the same time, it was sheer joy to read through his description of heavy rain in Galapagos. Again, he is spot on in representing through language how it feels to experience such a downpour in the Islands.

It was a sheer delight to read Jonathan Weiner’s view and account of the Grants’ life’s work, tied into the history of Charles Darwin’s long and tumultuous struggle with his findings and theories. It truly transported me back to the Enchanted Isles. On a personal level, it brought me back to one of my absolute favourite experiences: While part of the Charles Darwin Foundation (CDF), I spent a few weeks volunteering on one of the CDF’s Landbirds Projects. This volunteer work entailed climbing up and then camping on the crater edge of Alcedo Volcano on Isabela Island and experiencing quite a few things that the “Finch Investigation Unit” went through as well. With those memories still fresh in my mind, I can claim with certainty, that Weiner’s descriptors of what field work is like in Galapagos is spot-on.

It’s a highly recommended read for anyone interested in the scientific background of why Darwin’s Finches are as famous as they are, while also for anyone keen to read about evolution observed in “real time”. It will transport you to Galapagos and while you’re there, tickle your brain with fascinating facts and details. (If you need further convincing of how remarkable it is, the work garnered Weiner the Pulitzer Prize.)

Written by Kelsey Bradley Posted on 22 May 2021
news