Under the Microscope: International Community to Evaluate Galapagos Conservation

All World Heritage (WH) sites are subjected to international scrutiny, ensuring that the commitment to conserve the values for which they were allowed onto the World Heritage List is upheld.

The UNESCO WH Convention came into force in 1976 – it’s the only UN Convention to our knowledge under which countries give up a little bit of their sovereignty in exchange for having their most outstanding natural and cultural heritage sites formally recognized.

To get a site recognized under the Convention, a country must formally submit a very detailed proposal in which they must present the case for inscription.   Only sites that meet strict technical criteria and demonstrate the “outstanding universal values” recognized by the Convention can be considered for the list.   Proposals and their justifying documentation often run at over 1,000 pages.   The process for developing and formally submitting such a proposal can take several years.

Every year, UNESCO’s WH Committee (comprised of 21 elected representatives from among the nearly 200 countries that have ratified the Convention) will review these proposals, and guided by advice from technical experts, will decide on which new sites may be allowed onto the list.   The yearly event, usually in July, generates a tremendous amount of press coverage around the world.   A country having its site recognized by UNESCO is like winning a gold medal in the Olympics.   Local, regional and national politicians rejoice when a site is inscribed under their watch. 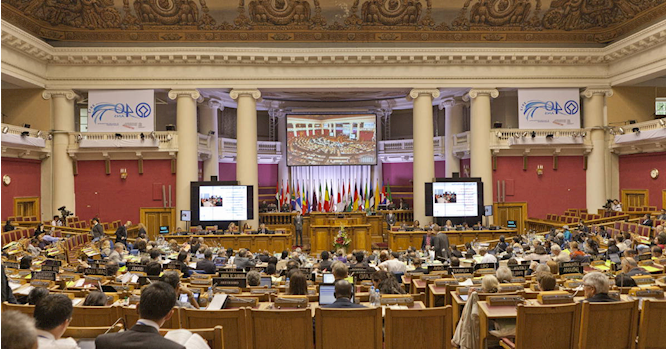 MINIMUM CONSERVATION STANDARDS MUST BE MAINTAINED... OR ELSE

But things don’t stop there.  Once having had their site admitted into the exclusive WH club, governments commit to maintaining minimum conservation standards.  To that end, the WH Convention secretariat in Paris (where I worked for 11 years) carries out on-going monitoring of a site’s state of conservation.  Through a variety of direct and indirect means, it gathers information / intelligence and assesses if a particular site risks falling afoul of WH Convention requirements.

At its annual meeting, the WH Committee will also take several days to review “State of Conservation Reports” for up to 200 WH sites that, for one reason or another, elicit concerns in regards to their conservation status.

GALAPAGOS UNDER THE MICROSCOPE

This July, the state of conservation of Galapagos will be subjected to the WH Committee’s review.  I used to lead that effort at the WH Convention’s secretariat (the WH Centre) and would produce, with support from technical advisors, the “Galapagos State of Conservation Report”.  The report described the latest information on conservation threats to the site, along with a summary of the Ecuadorian government’s own report on its efforts at dealing with them.   It concludes with a “draft decision” for the WH Committee to adopt, or amend.   Once completed, the State of Conservation report would be sent to the 21 members of the WH Committee for their review several weeks before the annual meeting.  At the meeting, I would present the content of the report, along with our technical advisors, and we would field questions from the Committee.

WH Committee decisions usually call for the government to take specific actions on specific issues.  In the worst case scenario, should the WH Committee determine that a country is not assuming its responsibilities in the conservation of a site, it could decide to remove that site from the list (this has happened only twice in the history of the Convention).

The 2021 WH Committee meeting will be held on-line, from the 16th to the 31st of July.  The Galapagos State of Conservation report has recently been made public and can be consulted here (I have extracted the relevant 6 pages from the 492 page document).

For those keen on understanding the mechanics of international conservation efforts through the WH Convention, it’s a good opportunity to be appraised of those issues that raise concerns.   In brief, as summarized in the report, these are:

From our perspective, having followed Galapagos conservation matters closely for nearly 25 years, the main underlying threat will always be the risk of introduction, establishment and spread of alien invasive species harmful to Galapagos biodiversity.  This threat exists only because there is a constant movement of people and goods between the mainland and the islands.  The greater this movement, the greater the threat, as species end up being introduced accidentally through food shipments, in people's luggage or by other means.

While Ecuador has implemented excellent phytosanitary protocols designed to keep alien species out, more can always be done, and the system will never be perfect.  It is almost always overhwelmed by the volume of work it has to carry out.

Tourism is the mainstay of the Galapagos economy, and growth in tourism is almost exclusively responsible for the increasing movement of good and people between the mainland and the continent.   While ship-based tourism numbers have been strictly capped for over 20 years and don't contribute to increased movement of goods and people with the mainland, land-based tourism remains open-ended.  It has been groing at double digit rates for 15 years (notwithstanding COVID years).  There is no limit to how many land-based visitors can come to Galapagos beyond what current infrastructure can accommodate.  Until this issue is addressed, it will be hard to manage the arrival of alien invasive species.

Beyond the fact that an expedition cruise is by far the superior way to experience the best of what Galapagos has to offer, it's also the best way to keep a lid on the threat of introduction of alien invasive species as a visitor.