Yet another opaque “must visit” list to enjoy with salt

Putting lists out there is recommended by advisors in the search engine optimization business and is considered a type of “click bait” - designed more to drive eyeballs to one's website, often more than to actually inform.  How many such lists have we come across in magazines, social media etc?   Who has not seen the likes of:

The Galapagos regularly makes it on such “must visit” travel destination lists. The latest click bait material appears in a Forbes Magazine article, entitled “The 10 Coolest Places To Go In The Next 10 Years, According To Experts”. Galapagos appears alongside other “cool” places like “Cambodia and Thailand” and “Mexico”. It must be a testament to the truly outstanding nature of tiny Galapagos to be on par with entire countries.

While we wholeheartedly agree that Galapagos should be at the top of the global travel destinations (for wildlife enthusiasts), shared with only a small handful of other places, we do feel that these lists belittle its iconic status (with all due respect to Cashel, in Ireland's Tipperary county, pictured below... another one on the Forbes' list of coolest places).

To make it onto Forbes’ list, the author “tapped a few of the people [she checks] in with every year" – three travel industry representatives. It seems the only criteria to have made it onto the list was to be “cool”. This is not what we would call a very rigorous methodology. It’s also one that is open to all kinds of abuse…. Did these experts have any vested interested in promoting tourism to these destinations? We can only guess. In the article, each gets to push a particular product (a hotel, a cruise ship…), along with having the website of their travel company appear. In the on-line world, getting your website mentioned in the Forbes magazine is worth quite a lot of money.

According to the expert who recommended Galapagos as a “cool” place for 2022:

“After a year of being closed (see note #1) the Galapagos is finally open, and the marine and land wildlife is more prolific than ever!" (see note #2)

Note #1: Graph illustrating monthly visitor numbers to Galapagos in 2020. FACT: The Park was closed for only 4 months. 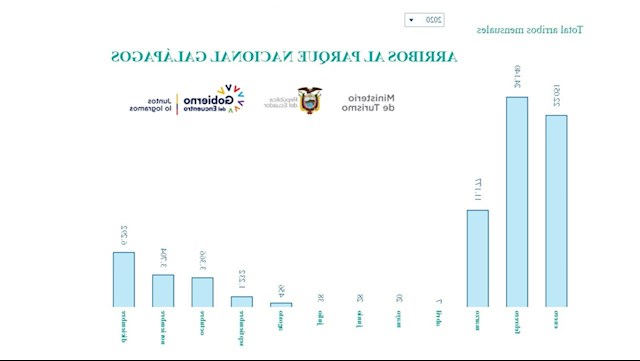 Note #2: My colleagues at the Charles Darwin Research Station say there is no evidence that wildlife numbers have been affected by the absence / reduced number of tourists during the pandemic - though behavioural modifications have been noted.

A List you can Take to the Bank
For eleven years, I worked for the World Heritage (WH) Convention’s secretariat, located at the UNESCO headquarters in Paris. The WH Convention secretariat’s job is to manage the most prestigious list on the planet: The WH List.

To make it there, a country proposes a site for consideration by the international community. The site has to meet very strictly defined heritage and conservation criteria. It has to demonstrate that it stands out at the global level in its respective category. It must go through a very rigorous evaluation, carried out by not-for-profit organizations staffed by heritage professionals.

The WH Convention was the product of over many years of work by the international community. More widespread enthusiasm for the idea came about after Egypt revealed plans to build a huge dam on the Nile River – which would flood the Abu Simbel archaeological site. Egypt claimed that it did not have the expertise nor the financial resources to do anything about it – but the global community, through the United Nations (UNESCO - the UN Educational, Scientific and Cultural Organization in this case) mobilized the necessary effort and succeeded in moving the massive monuments to higher ground (1967).

Re-location of Abu Simbel monuments in 1967

Elated by the success of this effort, the global community extended that level of cooperation into the development of a convention designed to help countries identify and protect their most valued cultural and natural heritage sites. The convention would also identify those that were of such outstanding global value that they would be formally recognized as “WORLD HERITAGE” and warrant international cooperation for their long-term conservation. The World Heritage List was conceived.

After many meetings, the text of the WH Convention was adopted in 1972. But it would not come into force unless at least 20 countries ratified at their national government levels. That happened in 1975. In 1978, at the WH Committee’s meeting in Washington D.C., the first site to be recognized under the WH Convention was the Galapagos Islands (the second was the historic city of Cuenca, also in Ecuador).  The World Heritage List was born.

So, when you see yet another list of “best places to visit” – take the time to ask yourself “based on which criteria?” and “who was in charge of evaluation the sites against those criteria and was the process fully transparent?”. You’ll find that in the vast majority of cases, there are no clear answers to those questions – and as a result, these lists are almost always tainted by the suspicion of having been influenced by ulterior motives, or at the very least, resting on very weak technical foundations.