La Niña: Back for yet another visit

We’ve all heard of El Niño, when the usual easterly trade winds over the equatorial Pacific tend to slow down in December, resulting in the back splashing of warm surface waters back to the coast of South America.  During a strong El Niño, sea Surface temperatures rise considerably, and rains can be heavy over lands close to the sea.

I first visited Galapagos in April 1998, at the tail end of the strongest El Niño in many years.   It was unbearably hot and humid, while the water temperatures were nearly fit for a bath.   The vegetation was very lush thanks to generous rainfall.   While these conditions favoured most land animals (and plants), the warm waters meant lower oxygen levels, but more importantly fewer nutrients.  This was catastrophic for any creature relying on the sea for survival – from fish, to marine mammals and even to sea birds and marine iguanas.   On my first cruise in the islands, just a few months later, there were desiccated marine iguana carcasses everywhere, along with a few sea lion skeletons here and there.   The Galapagos penguin population crashed.  Animals starved to death. 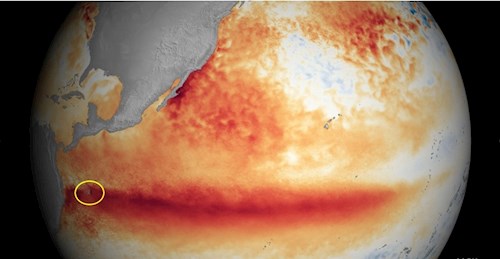 When La Niña strikes, conditions are completely reversed.  The water temperature goes down, it’s oxygen and nutrient rich – ideal for marine life, sea birds and marine iguanas. But it’s cooler and drier on land – vegetation can be sparse, making it difficult for land animals.   This year marks the third in a row with La Niña conditions manifesting themselves. 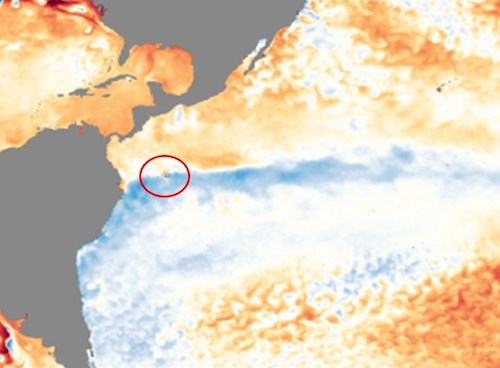 La Niña:  Cooler waters around the Galapagos archipelago. Note that most northerly portions may tend to have warmer waters.

As a visitor, the greatest impact will be felt when you get into the sea.  Water temperatures will be a few degrees lower than average.   Expect them to be as low as 16C or 17C on the western shores (61-62F) and a bit warmer, up to 21 or 22C elsewhere (70-72F) in the coming months.  The US National Oceanographic and Atmospheric Administration predicts that La Niña conditions will end in about by February/April.   But to compensate, marine life will be rich and diverse.   Enjoy!