Ho hum.  Another volcanic eruption in Galapagos.  Reporting on each eruption could become mundane – a bit like reporting on the arrival of winter.  One could argue that it’s not newsworthy.

A volcanic eruption, even if a relatively frequent event, will always be a moving, soul shifting spectacle.

We’ve been following Galapagos news for nearly 25 years now, and in that time, we must have reported on 6-8 eruptions.  Heather, the CNH Tours front woman, had the good fortune to join a very small group of scientists to fly over an eruption that took place only a few weeks after our first arrival in Galapagos, back in 1998.   “I saw boulders the size of school buses floating on rivers of lava”.  Her eyes still open wide today when she shares that story.

The latest eruption is an unusual one.  It started on 7 January 2022 and is still going strong today, two months later.  Most don’t last beyond one or two weeks.

Galapagos eruptions are not typically violent.  Pressure gradually builds below the surface.  The force presses against the outer layers of the earth’s crust until cracks appear.  The lava seeps out through these cracks.  No big thunderous explosions.  At first the lava might come out in squirts and  jets reaching up to 50 or 100 meters into the air, but as the pressure dissipates, one is left with a steady flow of lava out from the cracks, following the path of least resistance downhill, sometimes reaching the sea, where clouds of steam burst forth. 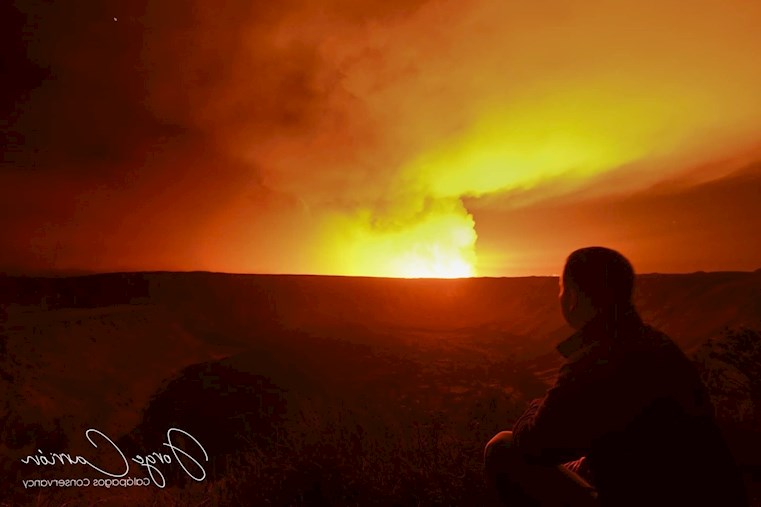 The current eruption happened on the south / southeastern flank of Wolf Volcano, which is located at the northern tip of Isabela island.   Above, we have a picture taken just moments after the eruption started.   The photographer (none other than former Galapagos Park director Jorge Carrión – an old contact of ours) was there as part of a scientific expedition.  His story:

In the picture, Jorge is looking over the deep volcanic caldera, beyond the opposite rim to the south. Interesting fact: The equatorial line runs right through the caldera - so Jorge is in the northern hemisphere, looking at the eruption which is in the southern hemisphere.

This stunning picture below was taken on 8 March by our friend and naturalist guide, Sofia Darquea (also former president of the Galapagos Naturalist Guides’ Association). Two months after the earth's crust split open, Wolf volcano continues to spew lava, just a few hundred meters south of the equatorial line. In the night sky, the hunter Orion watches, poised to shoot an arrow right into the lava stream.