Jekyll and Hyde of the Galapagos: The delicious invasive blackberry

This is your $100 park entrance fee at work.

These days, at the Charles Darwin Research Station, several experts are attending a workshop on biological control for the alien and highly invasive blackberry in Galapagos.

Most of us know this plant - it grows in thick stands, is full of thorns, but is a prolific producer of delicious berries.  Birds also like the berries.  They eat them up, fly away, and eventually, they drop blackberry seeds somewhere else, further propagating the plant.

Blackberry is not native to Galapagos. In the days before there was any control over what people brought over from the continent, some smart person thought they'd establish their own blackberry bushes in their yard.   The rest is history.  The plant is even found on uninhabited islands now.  It most likely arrived there after seeds were deposited by a fisherman on shore, a park staffer on a field job, or a scientist - any of which may have eaten some berries just before making the trip there.

The blackberry plants crowd out native vegetation and can take over large expanses of land.  Once established, the areas they occupy tend to be biological deserts, with little else present but the blackberry.   On Santa Cruz island, the blackberry is taking over the highland ecosystems, habitat for the endemic scalesia trees which support a variety of other endemic species, including the disappearing Galapagos vermillion flycatcher.

Until now, blackberry can only be controlled by a huge effort, sending teams of people pulling it out of the ground. It's delicious berries are eaten by birds, who then spreads seeds far a and wide. Once established, it crowds out native vegetation.

If some type of biological agent (a fungus, an insect) can be found that feeds exclusively on blackberry, it could help in keeping this alien invasive under control. 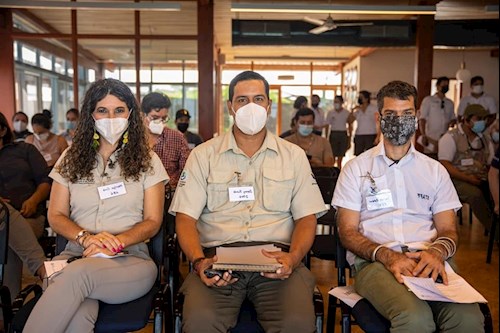