In the early hours of Saturday, a tourism vessel called the Albatros sank in Puerto Ayora, the primary port in Galapagos. The ship was carrying approximately two thousand gallons of diesel, which has caused a “superficial slick”, as described by the Ecuadorian environment ministry. The cause for the sinking has not been confirmed, but it’s expected that there might have been a ruptured pipe that caused the event. The authorities also believe there is still diesel onboard the ship and are working to confirm this detail. Puerto Ayora lies in Academy Bay, which is relatively small and hosts only a few dozen small ships, anchored in its shallow waters.

As protectors of the Archipelago, the Galapagos National Park authorities have placed a boom around the sunk vessel as well as dispersed absorbent sheets, to contain the oil as much as possible. In addition, they have released dispersants into other affected areas. Below an aerial shot from the Galapagos National Park of the boom – if you look closely, you can also see the Albatros below the water. 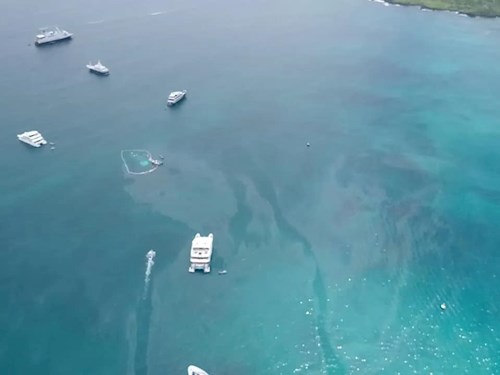 The Galapagos National Park along with other local authorities are keeping watch over the situation, but it appears that thanks to quick action, as well as the assistance from many local volunteers, the damage caused is minimal.

Very unfortunately, Galapagos is no stranger to major oil spills and ships running aground causing similar issues. As many might remember, the worst such disaster was in 2001 when the oil tanker Jessica sank off the coast of San Cristobal Island. In a record-breaking year, 2014 saw several cargo ships running aground (you can read our blog pieces on those as well: Grounded cargo ship is re-floated and towed away ; Cargo ship runs aground). One such cargo ship ran aground off the shore of San Cristobal in a very aptly named Wreck Bay. That particular ship was mostly loaded with produce and while the priority was to first offload and empty any petrol onboard, the town absolutely reeked -- unfortunately I can say that with first-hand knowledge of it...

Co-owners of CNH Tours Heather and Marc are on their way to Galapagos, arriving this coming week. They will be speaking with those on the front line of this work to contain the spill. Stay tuned here for further news and updates!

UPDATE (14 May 2022):  We were in Puerto Ayora a few days ago and even anchored very near to where the Albatross had gone down.  The boom is still in place and we observed technicians in the area.  Word from our sources is that the diesel is being slowly pumped out of the tanks in the ship.  While some diesel has spilled, the vast majority is expected to be retrieved. The overall environmental impact will have been minimal.