Yesterday, the Ecuadorian Navy reported the capture of a boat that was transporting protected species from the Galapagos.

The Navy statement specified that there were five land iguanas and an unspecified number of tortoises of different sizes on board.

Given the presumption of an environmental crime, through the Coast Guard Command and in coordination and advice from the State Attorney General's Office, the Navy carried out the inspection of the vessel  "XAVIER III".

The vessel had set sail last Monday, bound for Guayaquil.

On Saturday morning, the Coast Guard boat "Isla Darwin" inspected the aforementioned boat 30 miles (50km) offshore and found that on board the boat "XAVIER III" there were ten sacks of jute, five of which contained a land iguana each and in the other five there were tortoises of different sizes.

The evidence and alleged perpetrators will be placed at the orders of the competent authorities in the Port of Salinas on the mainland this Saturday for the corresponding legal proceedings. 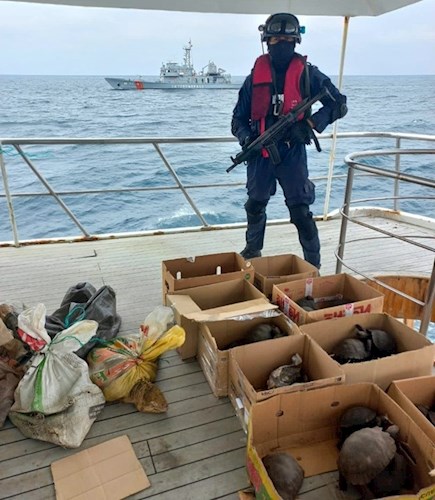