This month, the five planets visible to the naked eye will all be shining in the morning sky.   The best place on the planet to admire them is from a very dark sky nearest to the equator.   Anyone on a Galapagos cruise in the coming weeks, and with the will to get up no later than about 5AM will enjoy a rare opportunity to take it all in (there are almost always some planets to see in the night sky - so if you're traveling at another time, don't despair - just look things up on-line before going).

While the planets will be visible at higher latitudes, being on the equator will have them positioned just about perpendicular to the horizon – meaning that they will be higher in the sky relative to their apparent positions from higher latitudes and less easily lost in any early dawn light.

The figure below shows the positions of the planets later in June if observed from mid-latitudes (i.e. New York, Vancouver). 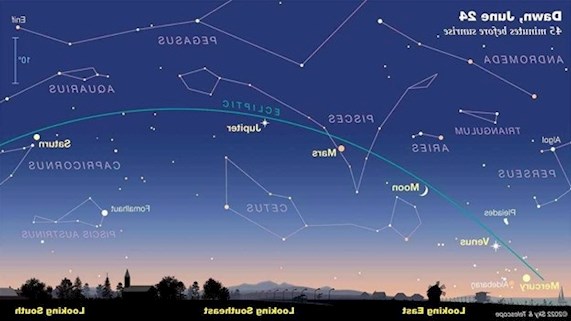 From an equatorial location, instead of being positioned on an acute angle from the horizon, the planets will rise up, perpendicular to it, from the East.  Figure 2 below is an amateurish attempt at illustrating the difference.

Mercury is always hardest to spot – it’s not that bright and is close to the horizon and only rises shortly before dawn, risking being lost in the dawn’s glow.  It isn’t too far from the more easily spotted Venus.

Venus is the brightest of the planets (after the moon and the sun, it's the brightest light in the sky) and thus the easiest to spot (if you know where to look, Venus can often be seen in full daylight – an interesting exercise is to keep a close watch on it as dawn progresses, and to keep on tracking it after the sun has risen).

Mars (the red planet) has a distinct orange tinge to it and will be dimmer than Mercury.

While Jupiter shines brightly with a whitish light, Saturn, while being almost as big as Jupiter, will be quite a bit dimmer (on par with Mars' brightness) because it's almost twice as distant as Jupiter.  It shines with a slightly yellowish light.   If you have a powerful set of binoculars (and a steady hand) you may be able to just make out the rings of Saturn.  Spotting a few of Jupiter’s moons should be a cinch with any decent pair of binoculars (look for tiny specs of light near the planet - watch them over a week and you'll see them change positions as they rotate around the planet).

For the real keeners – Uranus and Neptune are also aligned in the morning sky.   But to spot them, you’ll need to know exactly where to look, and you’ll need a good pair of binoculars at the very least – they are not visible to the naked eye.  Check on-line for spotting guides.

Do take some time while under the very dark skies to gaze at the stars and the milky way.  A decent pair of binoculars is all you need to go on an amazing astronomical mind trip.