They call them "Pàjaro brujo" in Spanish.  That translates into "witch bird".   In English they are known as "Common vermillion flycatchers" (Pyrocephalus rubinus).  While these birds are indeed fairly common in much of tropical South and Central America, Mexico and into the southwest USA, the Galapagos version, which looks very much like its mainland cousin (it's slightly smaller and not quite so brilliantly coloured), is considered a distinct species.  It's called the "Little vermilion flyctatcher" (Pyrocephalus nanus). 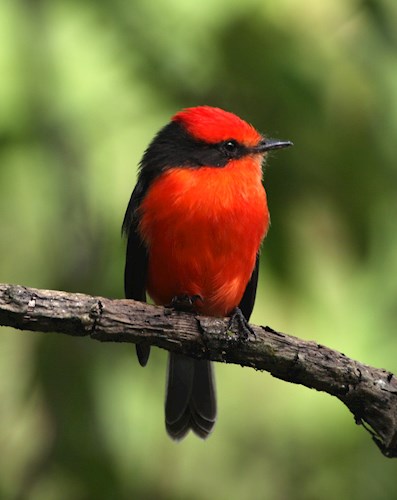 This very striking bird has been plagued in Galapagos on two fronts:

1) through prasitization by the "vampire fly" (Philornis downsii) - which arrived in Galapagos 30 or more years ago (possibly as a stoweway on crates of fresh food being shipped to the island).  The fly (which looks very much like a typical housefly) lays its eggs in the nests of various birds (including Galapagos finches) and their larva feed on the chicks - often killing them;

2) by the loss of its natural scalesia forest habitat, which has been clear cut for agriculture, and also succumbs to the very aggressive (and introduced) blackberry plant - likely intentionally brought in by early settlers.

The bird used to be found on Floreana island and San Cristobal island, but no more. 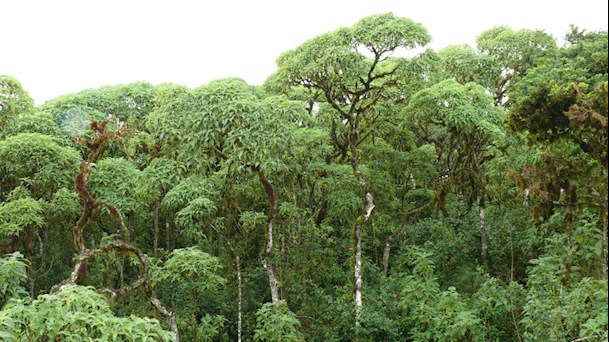 As part of an experimental project carried out by the Directorate of the Galapagos National Park and the Charles Darwin Foundation, this year seven new Little vermilion flycatcher chicks were born in an area of Scalesia pedunculata forest intervened by these institutions since 2018, in which scientists and park rangers implement actions to control two of the most threatening invasive species of the bird: the blackberry and the avian vampire fly (Philornis downsi).

These seven new birds are encouraging news for the survival of this species, which at the beginning of the project only had 30 breeding pairs. In 2021 there were eight fledglings and in 2020 six that were incorporated into the ecosystem thanks to the efforts invested by the DPNG and CDF in the area, which is considered the last refuge of the witch bird in Santa Cruz.

ISLANDS:  WHERE SPECIES COME AND GO
The challenges facing the little vermilion flycatcher are representative of those that many island bird species face around the world.  While remote islands like the Galapagos are well-known as crucibles for speciation - they are also places where species are more vulnerable to extinction.  Since the year 1500, at least 150 bird species are known to have become extinct world wide, and most of these extinctions have happened on islands.  Populations are by defintion small, and having evolved in unique ecosystems, they are very vulnerable to disturbances, such as the arrival of new species brought by humans, or even tsunamis or volcanoes.   Think of the Dodo...

If you are interested in how islands work as living laboratories for biological evolution while at the same time, are dangerous places for species - you may want to read the prize winning book "The Song of the Dodo" by David Quammen.  Read our review of this book here.