"The most incredible trip we have taken (with 40+ countries visited)"

One of our guests was on a rare 11 day Samba cruise in August.   On his return, he posted the most extensive review of a trip on the Samba that we have ever read on the TripAdvisor Galapagos Forum.  We asked his permission to "copy paste" it below. It will be very useful / informative to those consider a similar trip.

Hey all – we just returned from a 11-day Galapagos cruise and I wanted to share some feedback. As others have noted, TA does not have a spot to leave reviews for multi-day cruises, but it looks like folks are posting trip report/review combos in the forum. Here is mine. Apologies in advance for providing information that may be common knowledge or that has been said a thousand times. I have gotten so many good leads from TA forums and reviews that I want to give back a little.

We spent 11 days on the Samba, taking the northwest route and adding on a few southeast islands: from Baltra airport to North Seymour, then Genovesa, Marchena, zig-zagging between Isabela and Fernandina, Floreana, Santa Cruz, Española, and San Cristóbal. This was the most incredible trip we have taken (with 40+ countries visited). Thank you so much to Heather and CNH Tours for making the arrangements and tending to our planning and travel needs! 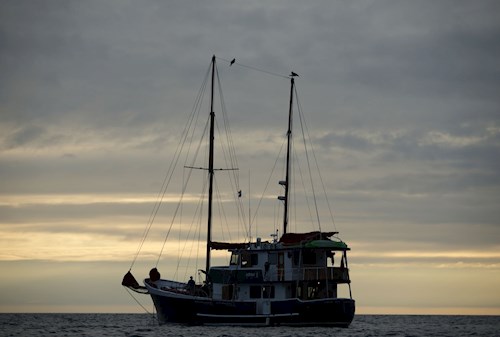 What made the trip so amazing? The Samba approach fit us perfectly. First and foremost, our guide, Juan Salcedo. He was born and grew up in the Galapagos. He is passionate about everything in the islands and demonstrates care for both the land, sea, flora, and fauna and the people that have come to experience, learn, and observe. I cannot imagine a better host and guide.

Next, the ship. The Samba is a smaller craft relative to the large and impersonal looking 100-passenger ships. Smaller, yes, with room for 14 passengers, but spacious enough to spread out. You can walk around the perimeter on the main and upper decks and seating is available fore and aft on both. The salon has a TV and DVD player (never on except to view photos, get a briefing of activities from Juan, and to watch a documentary on the early inhabitants of Floreana). It also contains numerous books for reference and reading enjoyment. I hadn’t finished my copy of “The Song of the Dodo” before the trip, and so read the copy on board when I had a few minutes.

We were in cabin 5, with a larger-than-twin lower bunk and twin upper, and an ensuite bathroom with shower. Storage options were two large drawers under the bunks where we stored our soft-sided checked baggage, laptops, clothes, etc.; a small set of shelves on the wall across mounted above the electrical outlets (two 3-prong 110v U.S. style and one UK style) for battery charging, glasses, books, and other items; a small shelf next to the bathroom door with cup holders for the provided water bottles; and finally a small reading rack type shelf beside each bunk. Each bunk also had a reading lamp on the headboard. Three hooks were positioned behind the door for clothes and jackets. Other than sleeping, we spent maybe 10 minutes in the cabin each day. By the way, Juan’s family owns the boat, and thus Juan has a personal tie to the boat and the crew. He also knows the boat capabilities and has a vested interest in its appearance, maintenance, comfort, and functionality. 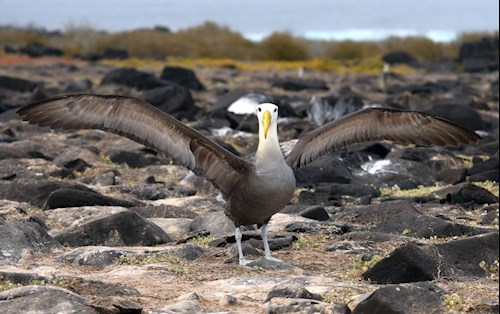 Then the crew. These guys seemingly have been together for years or even decades. Each one was always in a good mood and ready to help. Sometimes it was loading the panga or helping get our equipment. We heard plenty of laughter and good cheer from them. On several occasions, crew members helped some of our unsteady travel partners over some rough terrain. Most notably, they patiently assisted several folks more than a mile across uneven ground to the albatross nesting grounds on Española. On other days, Captain Jose and Don Ricardo were out snorkeling with us. Roberto, Enrique, Camilo, and Angel provided positive service without fail.

And the food. We ate the freshest of everything. Fruit, vegetables, fish, shrimp. Five times per day: breakfast, morning snack, lunch, afternoon snack, and dinner. Something different every day and more options than really was necessary. That is, something for everyone. Had a hard snorkel or long, hot hike on one of the islands? No worries as a snack was waiting to revitalize! And water, tea, and coffee were available all day. The best part, in my opinion, was that we might have felt full, but the food was fresh and light. We couldn’t figure out how Angel did it!

The real prize of the trip was the experiences of the island walks, snorkeling, and panga rides. It was during these that we benefited from having Juan as our guide and a being a small entourage of travelers on the Samba. Juan made minor schedule adjustments several times to get us to the action. “We are switching to place X because the currents have shifted and that’s where we will find the most activity.” Most days we were up at 5:30 in order to get the best light for photography and to see the early activity of the day. When I first read trip reports of “we were up so early” and “we returned from our trip utterly exhausted”, I was a little concerned. Well, we *were* up early every day, but then we went to bed early, too. In the roughly two dozen times we left the Samba on an excursion, we shared the trail/water with another group exactly zero times. We passed other groups a handful of times, always at the end of our excursion and the start of theirs. That is the beauty that was Juan’s knowledge of when and where to go.

It didn’t take long to figure out that listening to the guide was the best course of action. Invariably we would see iguana along the coast at landing—they are like the McDonald’s of the Galapagos. They are everywhere, not usually very special, but somehow attractive at every turn. “Ignore the iguana here, we will see better examples later.” Said more than once, and true every time. Juan’s experience brought us opportunities to see the usual and less-than-usual. Whales off the port side, check. Albatross circling around for another landing attempt, check. Snorkeling above hammerhead sharks and rays in the depths, check. Watching a sea turtle burying her eggs, check. Snorkeling with penguins and playful sea lions, check. Some of this is a bit lucky, sure, but Juan set us up for success at every turn.

We felt fortunate to share our on-board experience with some terrific fellow travelers, none of whom we knew prior to our arrival. I suspect that this was partly due to Heather and CNH Tours knowing the people already booked on the trip before we signed up. Still, we quickly bonded and enjoyed their companionship. Ages ranged from 35 to 85 yet we participated as a group on land and in the water. We always stayed together on land, and either one or two groups in the water supported by separate pangas and staff. And because our group was relatively small, we could stay an extra 30 minutes on the beach watching the turtle burying her eggs or spend more time riding the pangas through the mangroves or sit watching boobies diving for food. 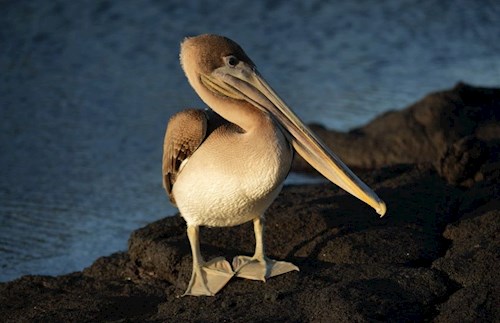 I will put a cap on the gushing words and close with some answers to questions I had going into the trip.

One was about being on a boat for 10 nights straight. Turns out it wasn’t a problem at all. Being on the boat meant getting to places like Fernandina where day trippers can never reach, arriving just after sunrise for early action, and having more time for excursions. The Samba did not feel cramped, crowded, or confining.

Another was on-board facilities. We always had safe, fresh drinking water (bring your water bottle!) plus coffee and tea. The private bathroom (with shower) in our cabin was small but serviceable. And we had three-prong plugs in our cabin for charging laptops and camera batteries throughout the voyage. I did bring along a small LED nightlight that I plugged into the bathroom outlet near the sink which made the nighttime trip to the loo a bit easier.

The Samba provided high-quality snorkeling mask, fins, and wet suit. These exceeded expectations and confirmed the claim that we did not need to bring our own. The water was cool as promised—a few of our crowd wore two wet suits.

Finally, were we packing the right clothing and gear. The layered look was in, just like on many of our other outdoor adventures. I took two shorts, two long pants (one of which was worn on the plane), two t-shirts, two sun hoodies, a fleece jacket, a lightweight hard shell rain jacket, and a hiking style ball cap. Three pairs of wool socks (one was relegated to being worn with the flippers while snorkeling), swim trunks and a rash guard, the latter being for warmth. And travel underwear. Everything being quick dry and moisture wicking. There was an option for laundry because we were on an 11-day trip but I didn’t need anything washed. I brought biodegradable liquid soap and didn’t use that, either. If you shower after swimming (almost every day), your clothes will stay relatively clean. I wore low cut hiking boots on the plane and on dry landings, water shoes with Vibram soles on the wet landings, and bare feet on the Samba. We didn’t take hiking poles, but if you have trouble on uneven terrain, you might prefer having them.

Because this was a photography-centric trip, we did bring along short and long zoom lenses for our DSLRs and put them in dry bags for the landings. No one ever had a problem with gear going into the water, but I didn’t want to be the first. We overloaded with batteries and memory cards and carried external hard drives to maintain multiple copies.

Whew. I am happy to answer any questions. Hopefully there aren’t errors, but I am open to correction.