Over the years, we’ve been asked this question more times than we can remember.   A lot of people are worried about getting seasick and in an effort to control as many variables as possible, many will often raise the issue of whether they should consider a catamaran or a monohulled ship.

First, it’s important to note that very few people experience serious seasickness while on a Galapagos cruise.   We’ve surveyed hundreds of returning passengers on this question, with the following results (where 1 = not a problem whatsoever and 5 = I wanted to get off the ship).  Here are the results:

They show that nearly 92% of respondents were hardly, or not at all bothered by seasickness on their cruise.   None experienced it to the point of wanting to get off.  Only 2.5% felt it had affected their enjoying in a significant way.

Still, at CNH Tours, we wanted to get a definitive answer on the catamaran vs monohull ship question.  Was there a difference?  Popular belief held the catamarans could be more stable (makes sense it seems... two hulls instead of one?), but a lot of folks we talked to didn’t agree. 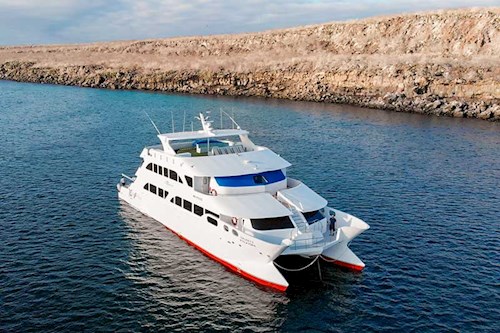 The EcoGalaxy - two hulls make it a catamaran

To resolve this dilemma once and for all, we sought the expertise of two US naval architects based in Japan, Nigel and John. They responded in terms of a ship’s “seakeeping ability”, which is a measure of a ship's suitability to sea conditions while in motion.

John stated that a ship’s seakeeping ability depended on various factors, such as the speed of the ship, the relationship between the wavelength and hull length, the angle at which the ship is sailing in relation to the waves, and the length-to-beam ratio (whether the ship is long and slender or short and wide).

The Grace - a classic monohull; long and slender

Nigel added to John's comments by discussing seasickness, which is often caused by a ship's heaving motion (up and down). He mentioned that this motion is most distressing to people who are not used to the sea, and that age can also play a role, with teenagers and people in their 20s and 30s being most vulnerable.  He made the interesting point that in seas with significant swells (long-wavelengths), it hardly mattered what kind of ship you were on (unless it was a massive, 4,000 passenger cruise ship), as the swell would push the ship up... and then down again, like a cork.

Nigel also mentioned that for shorter seas (more common in Galapagos), the motion of the ship would depend on resonance and that monohulls tended to roll more (side to side) while catamarans tend to pitch more (bow up, then bow down). The location on the ship and the direction of travel in relation to the waves would also affect the movement of the ship on the water.  Nigel  didn't think there would be a significant difference between catamarans and monohulls in terms of causing seasickness, but he did not that many people held strong, opposing views on the matter.

Based on our discussions with the two naval architects, we didn’t come back with a definitive answer.   It all seemed to boil down to “it depends”.   Now, when people ask us whether a catamaran or a monohull is better to limit the chances of getting seasickness, we answer: “it doesn’t make much of a difference according to naval architects”.

CNH Tours has been helping people arrange their Galapagos trip of a lifetime since 1999.

Galapagos:  We are TripAdvisor's Destination Expert

Antarctica:  Our expert has worked for 25 seasons in the region