The Institute of Geophysics (IG) of Ecuador confirmed yesterday the increased activity, increased flow fumaroles and sulfur odor in the Sierra Negra volcano, located on Isabela Island in the Galapagos.  The IG indicated that these signals could lead to an increase volcanic activity, located in one of the most active areas of the world.

The Galapagos, like the Hawaiian Islands, sit atop a “hot spot” over the Earth’s mantle, and are frequently subjected to volcanic activity.

According to the IG, the deformation in the walls of the mountain is due to magma rising to the surface.

From early April, there has been a recorded increased in the daily number of earthquakes around the volcano – which hosts the largest caldera in the islands.  Visitors can walk right up to fumaroles, can see bright yellow sulfur deposits, and take in the sulfur odor when on a hike to the volcano’s rim.  The last major eruption here was in 2005.  Eruptions here are like those of other typical shield volcanoes, such as in Hawaii.  They are generally not violent, emitting jets of lava for a few days, which make their way downhill, before things get quiet again.

I was very fortunate to have witnessed an eruption shortly after my arrival in Galapagos in 1998. With two others, we chartered a small plane which took us right over the flowing lava – a sight I will never forget. 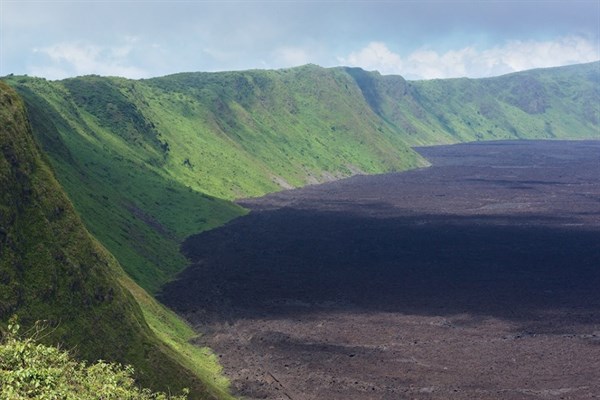